A Kansas City family is struggling after their 7-year-old boy was struck by a car, but a call to action by his dad inspired someone to show support on the other side of the country at an NFL game.

Just last week, a little football fan was struck by an SUV outside his family’s home, and he’s been fighting for his life in the hospital ever since. His father, Jacob Beemer, called on fans of the Kansas City Chiefs — he wanted to know if anyone could hold up a sign for his little boy at Sunday’s away game against the Buffalo Bills. And someone did.

Noah Kauffman lives in Lancaster, Pennsylvania, and when he heard J.J.’s story, it brought back powerful memories for him. When he was a child, his best friend was struck by a car and died, and J.J.’s plight moved him — especially when he found out the boy’s parents were hoping someone could create a sign display at Sunday’s Chiefs/Bills matchup. “His parents are going through a lot,” he tells me. “I just wanted his parents to know that all of Chiefs Kingdom was behind him and that J.J. was in our thoughts.” 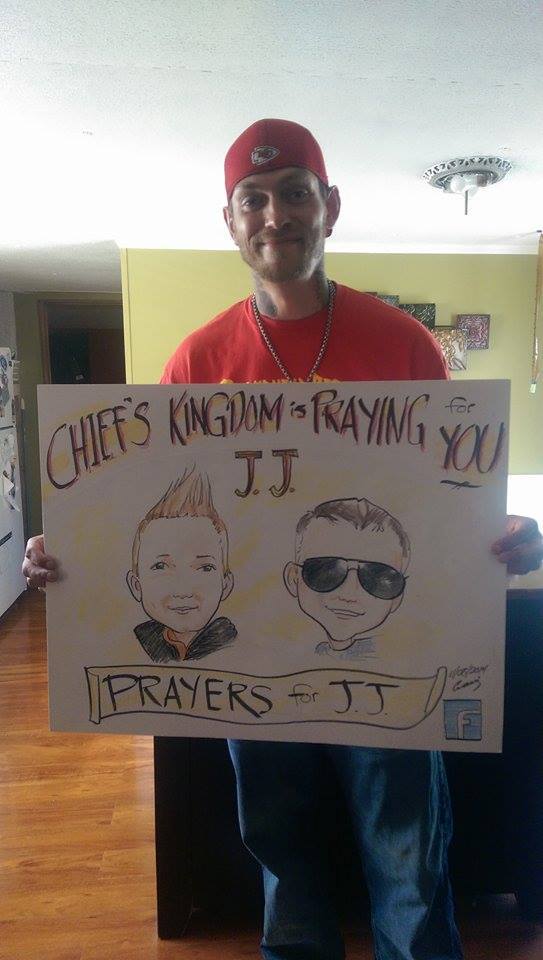 J.J.’s mom and dad were overwhelmed when they saw the photos Noah sent their way. Beemer says he and his son enjoy bonding over football games, and he knows how excited his son will be when he wakes up and realizes how much love complete strangers had for him when he was fighting for his life. Once J.J. is all better, Beemer hopes to take him to a football game, where he can hold up the sign himself.

Kauffman plans to travel to Kansas City for next weekend’s matchup between the Chiefs and the Seahawks, and he’ll be accompanied by his 18-year-old daughter and his nephew, who is around J.J.’s age. It will be their first game at Arrowhead, and what an amazing memory that will be for them. He will also be a huge inspiration for those kids — they will know what selfless love he had for a boy he never met. He hopes to have fans and possibly players add to the sign, which he will then present to the family.

“My friend didn’t have a chance when he was hit,” explains Noah. “He died instantly. But J.J. does. We wanted to get behind him and will him to live. We want to make sure that when he wakes up, he knows how much love the Chiefs Kingdom has sent his way.”

His family has set up a Facebook support group so friends, family and strangers can keep up-to-date on the little boy’s progress. I hope to read that he’s improving more each day so he can have a chance to realize an entire NFL fan base was rooting for him.

More kids and parents in the news

3 hrs ago
by Michelle Yang

5 hrs ago
by Susan Borison