What was on the minds and Twitter feeds of some of our favorite celebrity moms? Bethenny Frankel raised some eyebrows when she posted a picture promoting her Skinnygirl book — looking a bit too much of a skinny girl herself. Pregnant actress Liv Tyler showed off her adorable Halloween costume, while Kourtney Kardashian gave us a peek of her maternity costume. Kristin Cavallari’s sweet snapshot of Jax rounds out our list of the most buzzworthy celebrity moms of the week.

Real Housewives of New York City star Bethenny Frankel posted this picture on Twitter, promoting her new book, Skinnygirl Cocktails, and it caused many of her fans to point out that she may have followed her advice too closely and gotten a bit too skinny.

“So I love love love Bethenny but I say this in the nicest way…she looks thin in an unhealthy way. I know she is tiny but compared to like her main pic this pic is a bit concerning,” commented one fan on her Facebook page.

Frankel’s response? She told Elvis Duran in an interview that it is “crazy” that anyone would think she is unhealthy. “The way that my body was, it made me look like I was a skeleton, and it became this whole internet thing yesterday, that I’m anorexic and all this crazy stuff,” she said.

This isn’t the first time she’s caused a stir over a photo on social media. Remember when she posted a picture of herself wearing her 4-year-old daughter’s pajamas?

Liv Tyler spoke out for the first time about her pregnancy in the cutest possible way — in a “bun in the oven” Halloween costume. The 37-year-old actress is expecting her second child. However, it is her first child with her boyfriend, Dave Gardner.

Tyler also posted another shot of herself standing next to her son, 9-year-old Milo, as they get ready to go to a Halloween party.

Kristin Cavallari posted this sweet picture of her two sons, Jaxon and Camden, holding hands while they drink milk. The Laguna Beach alum recently revealed that 5-month-old Jaxon has colic, a condition in which babies will often cry for several hours at a time.

“They always say the second one is harder, and that’s very true. Jax is a little bit more difficult. But he is still the sweetest and the best. So it’s fine,” she told The Daily Mail. “I was very colicky as a baby, so I guess Jax is a lot like me.”

It looks like pregnant reality star Kourtney Kardashian is a Disneyland season pass holder, as she is often spotted at the theme park. She got in on the spooky fun at the amusement park with her kids.

Kourtney, who is expecting her third child, posted this picture as she and her son Mason are decked out for Halloween. 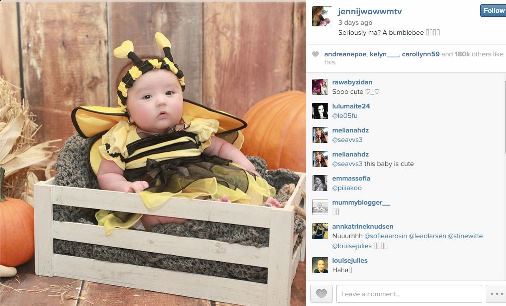 Jenni “JWoww” Farley dressed her daughter Meilani in the most adorable Halloween costume — a little bumblebee.

20 mins ago
by Sydni Ellis