Happy Wednesday Hump Day – also known to us as Celebrity Baby Bump Day. We have rounded up the cutest pregnant celebrities of the week including Kate Middleton, who showed off her baby bump for the first time since laying low due to extreme morning sickness. Pregnant Blake Lively turned heads on the red carpet in Gucci, while Kourtney Kardashian, Sara Gilbert and Vanessa Lachey round out our list of the cutest pregnant celebrities of the week. 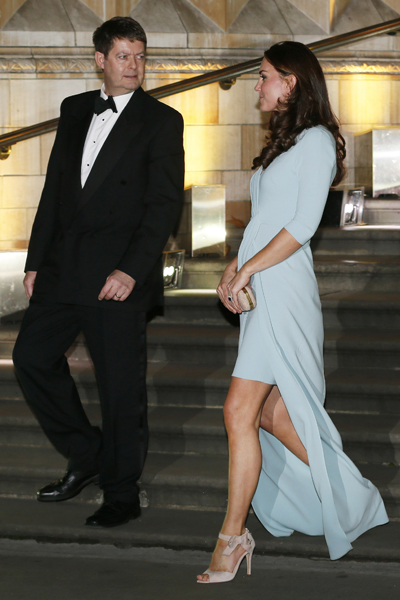 After laying low for several weeks while suffering with extreme morning sickness, pregnant Kate Middleton made not just one appearance on Oct. 21, but two (which meant an outfit change as well). She started out her day looking happy and healthy and showing off a tiny baby bump in an Alexander McQueen coat at London’s Royal Garden Hotel (see top photo).

The Duchess made another appearance later that night at the 50th Wildlife Photographer of the Year competition in a gorgeous blue Jenny Packham dress, which not only showed off her baby bump, but also a hint of leg.

“I’ve been looking forward to getting out of the house,” the Duchess told the president of the Republic of Singapore.

Her appearances come on the heels of a big announcement from Kensington Palace, which just confirmed that the royal baby, who will join big brother Prince George, will make an arrival in April.

Next up: Blake Lively looks stunning in a bump-hugging Gucci gown