Related story Why I Decided to Get Circumcised at Age 21

Raising awareness always sounds exciting, but I’m still a little confused. The way I interpret this genital autonomy pumpkin carving is something like, “Hey parents who just can’t slake your insatiable thirst to mutilate your child — instead of cutting up your innocent baby, cut this pumpkin instead.”

That’s right, I said mutilate. While both of my sons are circumcised, it wasn’t until I made the mistake of bringing up circumcision multiple times on the internet (like the dummy I am) that I realized it is a hot-button topic. After being called a child abuser and mutilator, with a kind offer to slice my labia from intactivists on Twitter, I realized that circumcision is kind of a big deal.

But back to the pumpkin carving. DrMomma.org has a handy slogan for parents who just want to cut something, “Cut pumpkins. Not babies.”

The website provides a template of the International Symbol of Genital Autonomy as a pumpkin carving pattern, and I have to say, it seems like it would be pretty easy to slice into a gourd. While I have to give Dr. Momma points for creativity — and for coming up with an outlet for knife-wielding parents — I have a hard time seeing how carving a cute symbol into a pumpkin will raise awareness to stop the practice of circumcision. 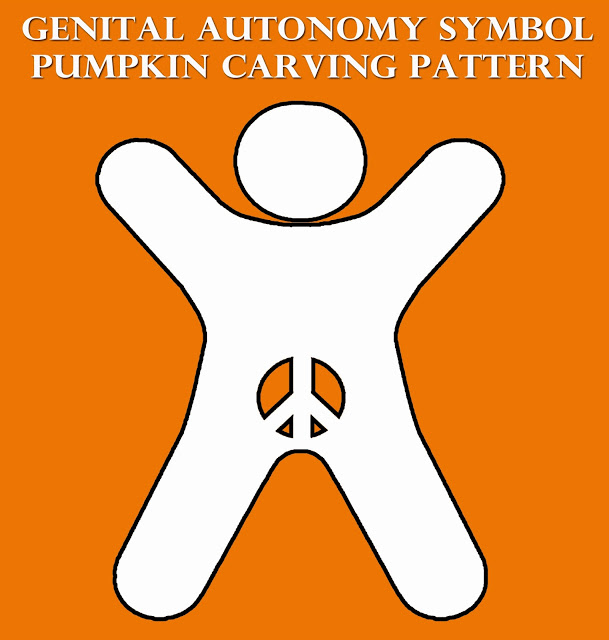 I guess it’s about time to share my unpopular opinion and brace myself for an onslaught of anti-circumcision hate. I don’t have any regrets about the decision that my husband and I made to circumcise our sons. The decision was spurred on by my husband as he is a circumcised man, and I agreed. The decision was not made lightly, and the circumcisions were done quickly, safely and successfully in a skilled pediatrician’s office. No regrets — not a one.

When it comes to the highly debated topic of circumcision, I believe it is a personal choice for parents to make. If you want to carve genital autonomy symbols into your Halloween pumpkin to support a righteous cause, get to carving. Just don’t expect your intactivist pumpkin to sway parents who believe they have made the right decision for their son.

10 hrs ago
by Allie Merriam