Kim Kardashian and Kanye West brought their 15-month-old daughter North West to the Balenciaga show during Paris Fashion Week — and the pint-sized tot managed to show off her walking skills, despite the fact she was wearing large boots.

Fashion show outfits are typically more for style than comfort — and Kim K. kept that fashion rule for both herself and for her daughter North.

She shared the above picture with the caption, “Balenciaga Baby,” as the family strolled into the show wearing matching black outfits. (Side note: Why so glum, Kanye?) Little North is decked out in in the family’s brand, wearing items form the Kardashian Kids collection and a Yeezus sweatshirt, in support of Kanye.

Even though Kim didn’t provide the fashion credit, Khloe Kardashian shared this same picture and wrote, “Baby girl reppin her mommy and daddy today in @KardashianKids leatherette leggings+skirt and her Yeezus tee!”

North has been walking since July so she is probably getting pretty good at it, however walking in tight leather leggings and black Timberland boots is a whole other story. 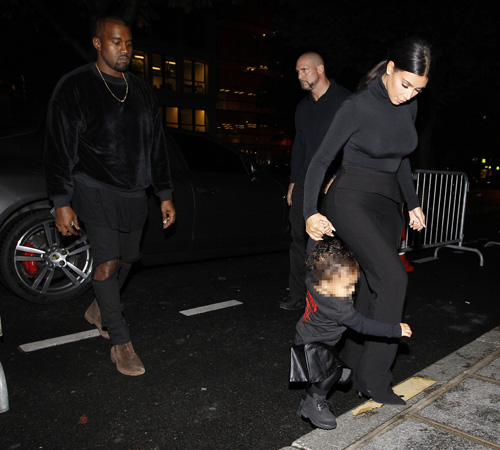 Kim held North’s hand as she managed to walk up the steps, past the photographers and into the show.

She actually told Yahoo! Style that bringing North to the fashion show was a last-minute decision.

“She started to cry when we were walking out the door [of our hotel] and we couldn’t leave her. So, it was a spur-of-the-moment thing,” she revealed.

North sat on Kim’s lap throughout the show, as her parents watched the models stroll down the runway. And what did the pampered tot think of her first fashion show?

“It was an amazing fashion show for her to be at for her first show,” Kim said. “She loves it!”