What would you do if you saw a baby in a locked, hot car? A Texas woman didn’t hesitate — she bashed in the windshield and rescued the baby herself.

Angela Radtke noticed that a 1-year-old child was trapped in a car seat in a Texas parking lot, and she didn’t think the baby could wait for rescue any longer. As she debated breaking the window, other shoppers and on-site security advised against it, but she did it anyway.

Radtke broke the windshield with a tire iron, crawled through the hole and rescued the baby in a matter of minutes. She was even injured by the glass in the process, but told KENS 5, “I don’t care if I get arrested, I’m going to save this baby.”

Security footage of the parking lot showed that the baby was in the vehicle for around 40 minutes — more than long enough to become ill in a hot car. H-E-B, the grocery store where the parents were shopping, tried to page his parents, but they didn’t respond until much later. 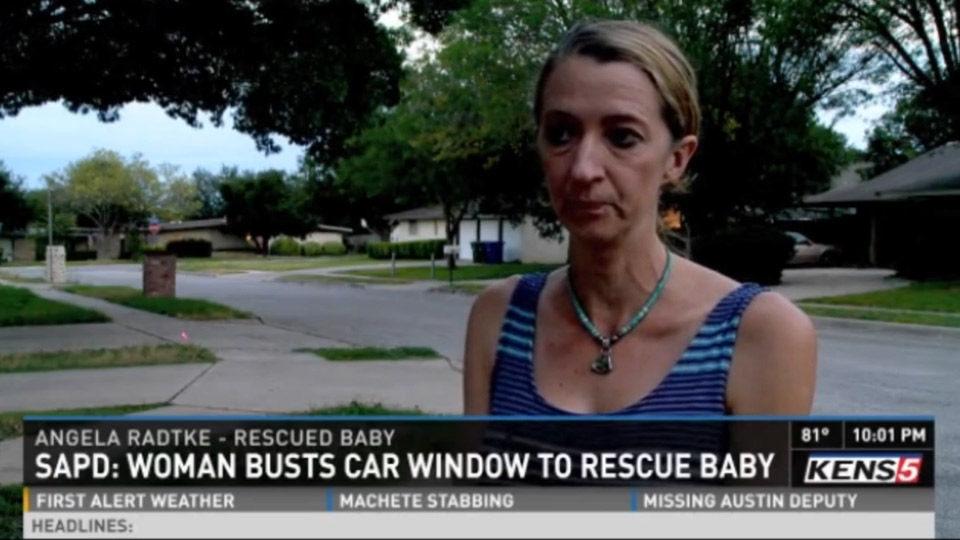 Fortunately, the baby was treated for dehydration and was released into protective custody, so he wasn’t seriously harmed. And even though Radtke was questioned by police, she will not be charged due to “Good Samaritan” laws that protect people in these situations.

The baby’s father did admit to police that he forgot his baby in the car. He is facing charges of child endangerment, but he’s lucky that someone noticed and saved his little guy. Sure, it sucks that his windshield has a huge hole in it, but I’m sure he’s eternally grateful that Radtke broke through it to save his baby boy. It really doesn’t take long for a forgotten baby to pass away in a hot car.

The original article doesn’t mention when police were called, but I have a feeling that Radtke used her own feelings of intuition when she decided to break the windshield. Often, if the police are called for a hot-car situation, first responders will arrive and monitor the baby from outside the vehicle until a locksmith can open the door. They generally don’t intervene unless they can see the baby is in distress and emergency rescue can get underway.

It’s still plenty warm in Texas, and even warm, pleasant temperatures can cause the interior of a car to bake like an oven. Thanks to a quick-thinking woman, even though this baby had a miserable and frightening 40 minutes, he isn’t another sad statistic.

More on kids in hot cars

I left my toddler in a hot car
Mom calls 911 to free her child from a hot car, dispatcher hangs up (VIDEO)
With funding, this high school senior’s invention may prevent child hot-car deaths