It wouldn’t be high school without bullying. While many parents think bullying is a rite of passage and all part of The Breakfast Club fun of high school, cruel teasing has gotten out of hand. One Texas homecoming queen has taken a stand against “mean girl” antics with a beautiful gesture of friendship.

I remember high school vividly. I wasn’t necessarily popular, but I had a lot of friends. I fortunately wasn’t teased enough for anything to stick out in my memory, but I remember the teasing culture well. This was 15 years ago, far before “bullying” had become a popular buzzword.

Sure, we were taught to not bully in school, but most students, including myself, turned a blind eye when the inevitable teasing occurred. I can’t say I would have been as brave as Anahi Alvarez after she found out about the cruel prank played on her friend, especially at age 17.

One of Anahi’s best friends, Lillian Skinner, was the victim of a cruel homecoming prank. Lillian, also 17, is described by her friends as one of the nicest people you’ll ever meet. Perhaps it was her friendliness that made her vulnerable to a heartless “mean girl” prank you would only hope to see on TV. 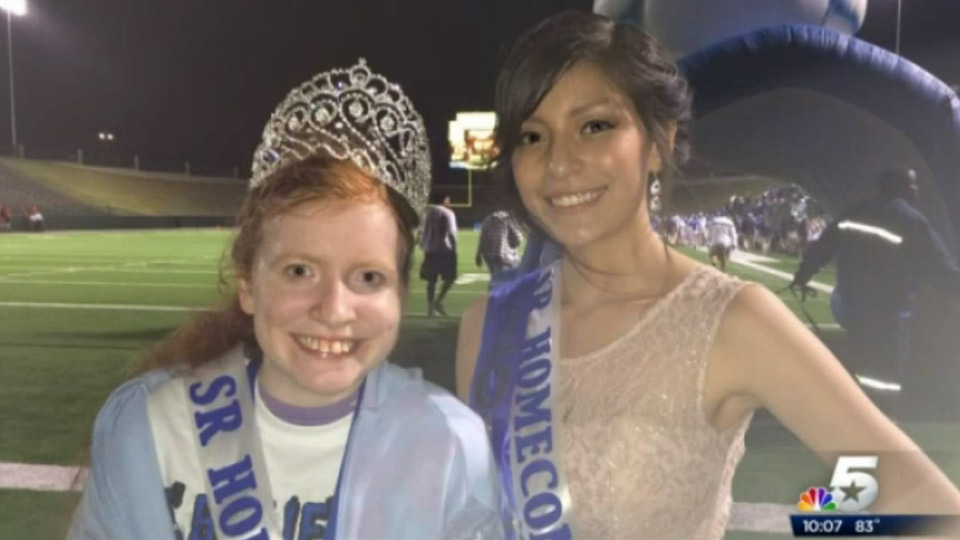 Lillian was led to believe by a group of unnamed girls that she was nominated for homecoming court with her two best friends, Anahi and Naomi Martinez. Anahi ultimately won the crown but didn’t let the shining moment go to her head. Anahi and Naomi had been cooking up their own antidote to the prank played on Lillian. Naomi said, “We promised each other, and we were like, ‘No matter what, no backing down. If one of us wins, we’re giving Lillian the crown.'”

As part of the “new prank,” Lillian was asked to take pictures of the homecoming court procession on Friday night at the Gopher-Warrior Bowl. Instead of receiving the crown for herself, Anahi crowned her friend instead. Anahi said, “Well, for me, I want to say, and I always say, ‘Lilly won. I just ran in her place, in her position.'”

Finally, finally, finally, we have a positive story about bullying that doesn’t make every parent want to lock their kids inside for the next 20 years. High schoolers aren’t all self-centered jerks. Not every high school girl is a mean girl. Yes, there’s bound to be bullying in school, but with stories like this, it proves that even one compassionate student’s actions can make a huge difference.

Pass this story on to your kids.

7 Things your high school freshman needs to know
Teacher suspends high-school student for using manners. No really. That happened.
We owe it to our teens to talk about campus sexual assault