I want to have sympathy for Adrian Peterson. Really, I do. I am staunchly anti-spanking, but I also realize that people make mistakes. I was hoping his brutal “whooping” of his 4-year-old son that resulted in possible felony child abuse charges was just that, but more unpleasant details have come to the surface.

Minnesota Vikings running back Adrian Peterson is facing new child abuse allegations involving another 4-year-old son. These allegations are over a year old, and Adrian’s camp calls them “unfounded.” Another mother of another 4-year-old son has come forward to confirm Adrian striking the boy as discipline. KHOU News also obtained photos from June 2013 that showed a head wound to the boy, which allegedly happened when he was visiting his father at his home in The Woodlands.

Adrian’s lawyer has released the following statement: “The allegation of another investigation into Adrian Peterson is simply not true. This is not a new allegation, it’s one that is unsubstantiated and was shopped around to authorities in two states over a year ago and nothing came of it. An adult witness adamantly insists Adrian did nothing inappropriate with his son. There is no ongoing or new investigation.”

Within a text message conversation between Adrian and the mother of his child, he admits to disciplining his young son for cussing at a sibling. Adrian claims his son hit his head on a car seat after a whooping in the car. The boy’s mother filed a report with CPS over the incident, but CPS declined to comment. 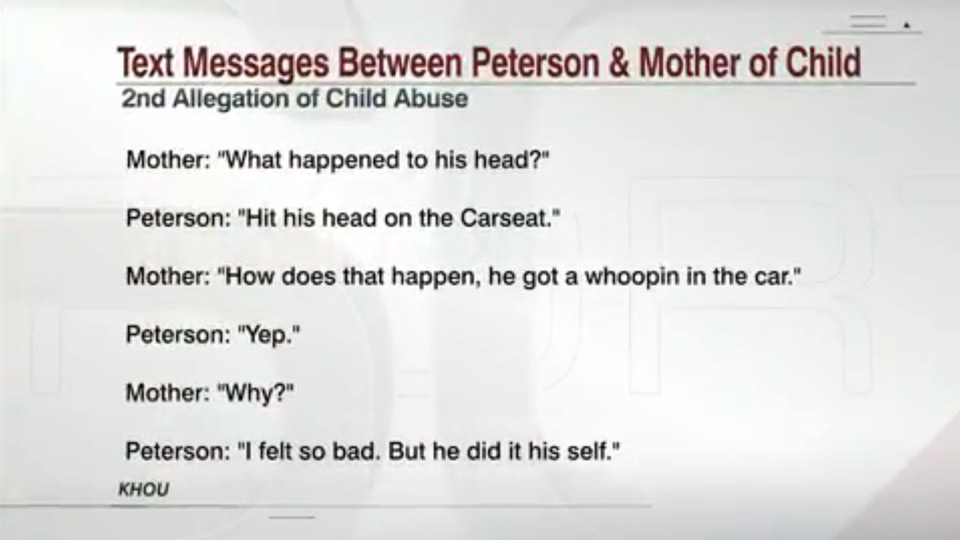 In light of the ridiculous headlines associated with the NFL in past weeks, the organization has finally decided to do something about it. NFL commissioner Roger Goodell has appointed three domestic violence experts to advise the league. If the NFL truly begins to take abuse seriously, then we can only hope the actions of Ray Rice and Adrian Peterson will no longer be socially acceptable.

I can’t say whether this second story about Adrian Peterson is true or not, but the allegations don’t look good. Where there’s smoke, there’s often fire. Adrian has already publicly apologized for the first case of child abuse that made headlines this week, where he disciplined his other 4-year-old son with a switch, but he is adamant that he is not a child abuser.

I disagree. Potentially treating two children with violence and causing injury is not normal. It’s also not an accident. Many parents choose to continue to spank their kids because of how they were raised — the old “I was spanked, and I turned out fine” argument. It’s our job as parents to question and evolve and treat our kids differently. It’s our job as parents not to abuse our kids.