If you love sci-fi but aren’t ready to go all out with a Star Wars marathon, then check out “Star S’mores.” It’s a perfect parenting mash-up of two childhood favorites — Sesame Street and Star Wars.

Are you a sci-fi fan but don’t think your preschooler is quite ready for six episodes of Star Wars? Do you think Darth Vader, blasters and aliens might be too much for your child to deal with at such a young age? Never fear, Sesame Street will help your geek-in-training get an early start with its excellent Star Wars spoof.

“A long time ago, in a cookie and milky way galaxy far, far away…” The beginning of this five-minute video will immediately trigger your nerd radar, as the characters, who are, of course, completely familiar to you, make their introductions. We have Luke Piewalker and his trusty band of compatriots, who are off to save Princess Parfait-a, who is adorned with giant cookies on her head in place of Leia’s signature buns.

As is typical of Sesame Street, there is a lesson to be learned. Flan Solo, played by Cookie Monster, is joined by a gigantic cookie called — can you guess? — Chewie the Cookie. Flan must exercise plenty of self-control, because he, of course, wants to devour his partner. 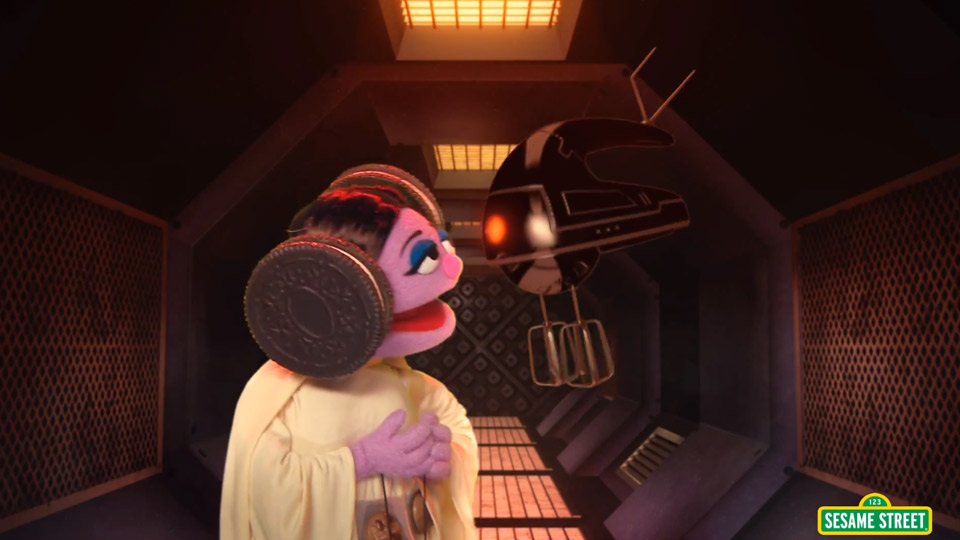 Hard-core geeks will love all the clever touches, such as Grover standing in for Yoda (the amazing Frank Oz does the voices for both, and I got serious chills when Groda said, “When 900 years old you reach, look as cute you will not”).

It can be hard to decide when it’s appropriate to start showing our favorite sci-fi flicks and TV shows to our brood. While it’s stuff we may have grown up with, showing a child the ins and outs of some of our faves probably won’t be on the table until they have a few more years under their belts. This is what makes this spoof so great. Though they do give away a huge spoiler for the original trilogy, if you show this to your 3-year-old daughter, she may not remember that plot point when she’s older. And there is no shooting, no light saber deaths, no badass heavy breather. It’s lighthearted and fun.

And you can look forward to the Star Wars marathon you will have in a few years, although which trilogy you start with is a decision only you can make.

Above all, be sure you remember the wise words of Only One Cannoli: “The Four will be with you, always.”

Screen time for kids may not be so bad after all
Watch teens attempt to play original Nintendo (VIDEO)
Popheads are hysterically ridiculous, and we want three of them