Happy Wednesday Hump Day — also known to us as Celebrity Baby Bump Day. We rounded up the cutest pregnant celebrities of the week starting with Kate Middleton, who announced she is expecting the second Royal Baby. Does she have a baby bump yet? Check out the newest pictures here. Ashton Kutcher shared an adorable pic of his pregnant fiancé, Mila Kunis, while Carrie Underwood debuted her baby bump in floral. Kristen Bell and Shakira round out our list of the cutest pregnant celebrities of the week. 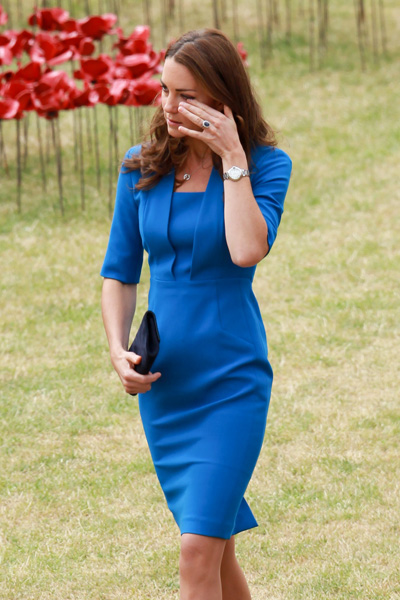 Middleton was spotted last month wearing a blue dress as she visited the poppy installation at the Tower of London with Prince William and Harry. She doesn’t look to be showing much yet (maybe just an itty-bitty baby bump), however sources indicate she is very early in her pregnancy, around the eight week mark, and is due around April 2015.

As with her last pregnancy, the Palace confirms she is suffering from severe morning sickness, which is why they made the difficult decision to announce her pregnancy early, instead of waiting until she was out of her first trimester.

“As with her first pregnancy, The Duchess is suffering from Hyperemesis Gravidarum. Her Royal Highness will no longer accompany The Duke of Cambridge on their planned engagement in Oxford today. The Duchess is being treated by doctors at Kensington Palace,” the statement continued.

Next up: Ashton Kutcher shares an adorable pic of pregnant Mila Kunis