What is happening to our world when parents have to be reminded to vaccinate? Sure, it sucks to poke your baby with a needle and watch them writhe in pain for five seconds. It would also really suck to have your precious baby die of a completely preventable disease.

Vaccinate your kids, people. The Centers for Disease Control (CDC) has confirmed what many of us have suspected: Anti-vaxxers are ruining things for the rest of us. The CDC states that there have been 592 cases of measles since the beginning of 2014. The year is far from over, and measles outbreaks have already hit a record high since the disease was “virtually eradicated in 2000.”

This is not good. Mic.com states, “The outbreaks have been growing due to unvaccinated people traveling outside the country and bringing the virus back home. The anti-vaccination movement has also been linked to this measles resurgence due to the fact that communities with low rates of immunization are more at risk of a contagious outbreak.”

Though it should not take begging and pleading to convince parents to vaccinate their kids, one chart may put it in perspective. 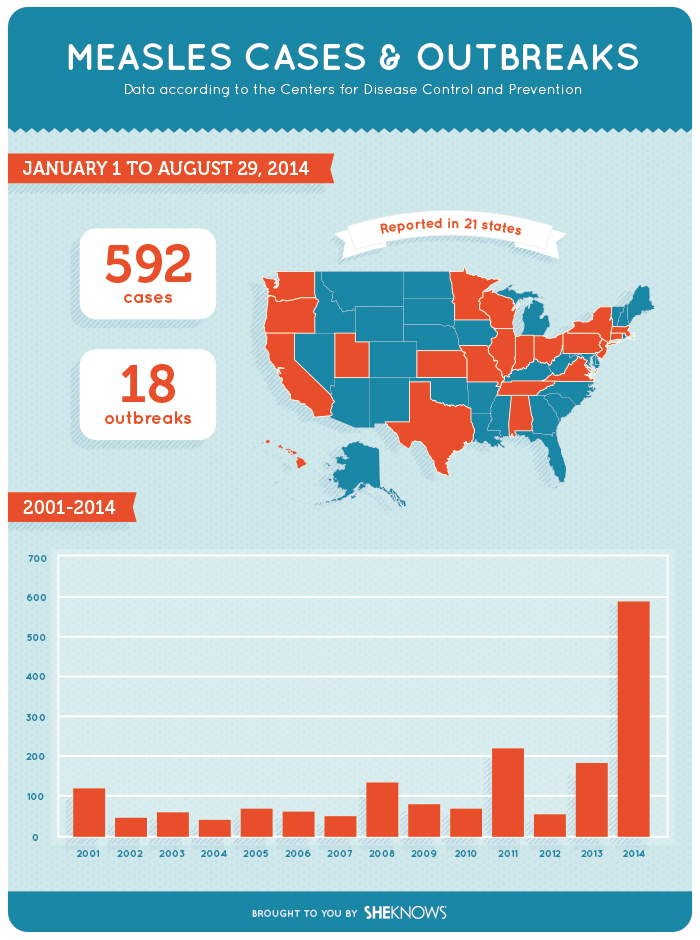 The measles vaccine (MMR), provided in two doses, can create immunity in up to 95 percent of people. Cue the selfish anti-vax argument, “If your kids are vaccinated, why does it matter if my kids aren’t?”

Well, there are a number of factors to consider. No vaccine is 100-percent effective, measles included. Besides primary failure, a vaccine can also result in secondary failure, or a loss of immunity years later.

Parents vaccinate their kids in order to create herd immunity. This means that if the majority of people are vaccinated, i.e. the herd, it can stop outbreaks from spreading. Even if a vaccine does not work 100 percent, you will be less likely to contract a serious disease because of the protection of the herd around you. This also applies to those with lowered immune function who may need herd protection, like infants and the elderly.

Measles is rarely fatal, but that doesn’t mean parents should stop vaccinating. Measles is also one of the most contagious diseases in the world. It can cause serious health complications and even death in one or two cases out of 1,000. But really, aren’t we missing the point here? Measles had been all but eliminated, and now it’s coming back. This resurgence of childhood measles is entirely preventable, but parents have dropped the ball.

Teen’s DIY abortion lands mom in prison
Confession: I hate playing with my kid
Talking about end-of-life decisions is no joke

17 mins ago
by Julie Kottakis