A Mississippi mom is furious after her daughter came home from school sporting serious bruises and swelling on her face.

AvaLynn Harris is just a kindergartener, but her mom says the young girl was a victim of a vicious playground beating.

One look at the little girl’s face, and it’s easy to see something happened. Her eyes are purple and swollen, and there seems to be significant bruising to areas around her mouth. The Pascagoula School District issued a statement admitting that an incident did happen on Aug. 28, but that “no other children were involved in the incident.” The official explanation? She fell off a slide. 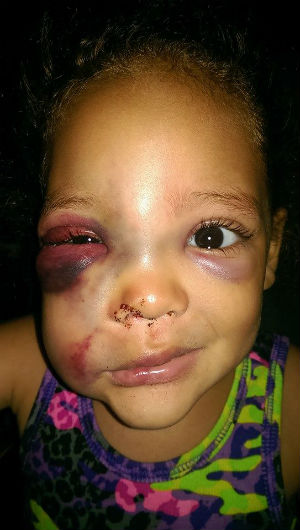 Lacey Harris, AvaLynn’s mom, filed a report with the Pascagoula Police Department alleging at least one other student attacked her daughter. Unfortunately, it appears as if no adult was present to witness whatever “incident” transpired, and the police declined to investigate.

Harris instead took to Facebook, setting up a page called “Justice for AvaLynn.” The page also links to a GoFundMe account, which has become a source of criticism for those doubting, or at least questioning Harris’ story.

The account, set up for “medical needs and travel expenses,” has raised nearly all of its $10,000 goal since it was created on Aug. 28.

Participants on Harris’ Facebook page have been trading theories and conspiracies; some say the local police department is deliberately changing their story to evade the truth, others say the whole account is a scam for money.

Whatever the truth is, this poor little girl’s injuries look awfully real. We hope she’s OK.