Katherine I. Daily Elementary in Noble, Oklahoma, tried to limit bathroom breaks for students at the school as young as 5. But why?

A memo one mother received from her child’s teacher noted that bathroom breaks were limited to two per day, with all children going to the bathroom at set times and at other times only in an emergency circumstance.

The memo went on to say that if the child has to miss class to take a bathroom break outside of the scheduled “as a class” breaks, then that time will be taken away from the child’s recess time. Are they kidding? So having to go to the bathroom more than twice a day at specific times is now a punishable offense?

The mother, clearly upset, sent the letter to Fox 25’s newsroom. When reporters reached out to Noble Public Schools Superintendent Ronda Bass, she refused to go on camera and called the incident a “misunderstanding” between the parent and teacher. She said that the teacher’s intent was to help the children learn about “time management at school” and that the school’s principal had been on board with that lesson.

She also noted that if a child really needed to use the bathroom, he does not need to fear punishment or loss of recess privileges. However, the “misunderstanding” excuse looks like nothing more than backpedaling from where I’m standing. The words are written as clear as day in the memo. What’s to misunderstand? 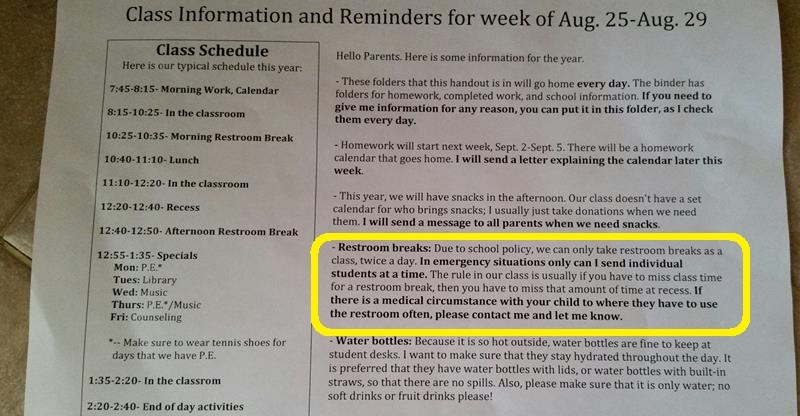 Sadly, this is not an isolated incident. Oñate High School student Zachary Gregory sent a message to the Las Cruces Sun-News complaining about the fact that bathroom breaks had been limited and time between classes shortened by a full minute. He wrote, “Many teachers are limiting the amount of restroom passes students can use to three per nine weeks. Telling students to take care of their business on their own time when clearly there isn’t enough.”

Once again, teachers here defended the rigorous rule, saying that it’s about teaching the children a valuable life lesson. Las Cruces Public Schools spokeswoman Jo Galván told the Sun-News, “It’s not trying to prevent someone from going to the bathroom. [The teachers] want students to be responsible and show up to class on time.”

Sure, there may be a kid here or there abusing the bathroom break as an excuse to get out of class. But don’t you think the better way for the school leaders to handle this would be to work directly with that child and his family about the problem instead of putting out a blanket of limitations for the entire school?

This is particularly bothersome for children in the younger grades as they are still getting a handle on their bodies and figuring out the timing of how long they can “hold it” before it’s too late. Not to mention the fact that some kids may find the need to ask to go to the bathroom embarrassing enough without fearing that they’ll get reprimanded for the rare need to go potty outside of set bathroom times.

Schools are focusing too much on the nuances of things and handling minor issues as a whole versus trying to solve a specific concern or problem with a handful of students. If my kids’ school had set potty times only, I’m pretty sure I’d have a lot more laundry to do.

More on school discipline and education

Teacher suspends high-school student for using manners. No really. That happened.
Does homeschooling put your kids at a disadvantage socially?
How back-to-school shopping can be a budget lesson for kids