A Florida mom called 911 when her baby became accidentally trapped in her hot car — but the dispatcher not only didn’t send help, but actually hung up on her.

Related story Does Knowing Other Parents Drop & Bump Babies Help the Guilt When It Happens to You?

Shana Dees and her 10-month-old son, Jack, were running errands in the hot Florida sun last Saturday when he accidentally locked the car while playing with his mom’s keys. Not only was her son inside, strapped in his car seat, but so was her phone. She could see he was already getting hot and upset, so she begged a passerby for a phone to call 911, thinking she could get someone to rescue her baby.

The 911 tape reveals the garbage the dispatcher told this frightened mother. “They won’t be able to try to gain access [to the] car unless the child is in some kind of distress and, well, by that point they may just smash your windows,” the dispatcher said.

The Tampa Police Department is investigating, and they say this was not the proper protocol at all. Fortunately for Dees and her little boy, an off-duty police officer noticed the commotion, called 911 and got the proper response — that dispatcher found out where they were and said a fire truck and police officer were on the way. In the meantime, another customer broke the window with a wrench and rescued the baby boy. 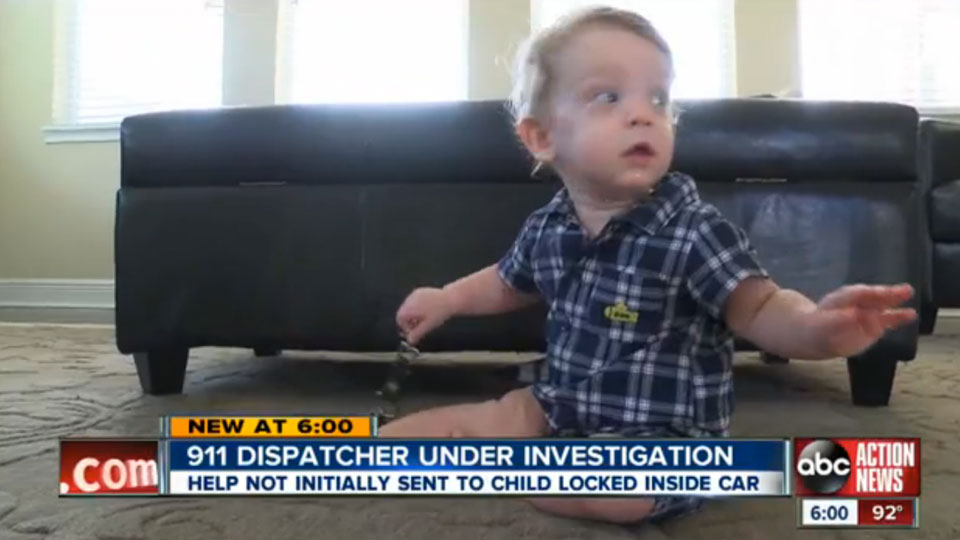 Another mom I was able to speak with, Diane, had a similar experience when her husband accidentally locked their 2-year-old in their car — also in Florida. Only when her husband called 911, it went the right way. “They took care of everything,” she tells me. They put in an emergency call to AAA to send someone to unlock the door, and while they waited, they sent out the fire department to monitor the situation.

They watched for signs of distress and were prepared to break a window if the need arose. AAA showed up in about 20 minutes and unlocked the car. She shares, “The fire department gave my son some stickers and cold water and made sure he was OK. It went very, very smoothly!”

I have a recurring nightmare where something drastic or horrible is going on and I dial 911. The nightmare part? Either the phone stops working or nobody answers. The fear I feel in these dreams is major, and I always wake up feeling dreadful. I imagine Dees felt the same — betrayed by the services she thought she could trust in her time of need.

Strangers rescue Kansas City toddler from hot car, mom throws punches (VIDEO)
I left my toddler in a hot car
Support pours in for mom who left kids in a hot car