The Argyle Independent School District of Texas has put criminals on notice: Try to hurt our students and you may not make it out alive. Some teachers have now been trained and authorized by the district to carry concealed weapons while teaching, as School Marshals under the Protection of Texas Children Act.

The district voted in January to authorize school marshals, then reaffirmed the policy last week. Like air marshals, the amount and number are being kept secret for safety reasons — meaning your child could be in the room with an armed teacher without your knowledge. The policy allows for district employees who already have gun licenses to be authorized to carry specified firearms on campus, to sanctioned events and to board meetings. Wow. Only in Texas.

Even as a huge gun-rights supporter I’ve always been against teachers carrying at school. My reasoning? The majority of humans don’t have it in them to kill, and if you are firing a weapon that may be the end result. If a person has a gun but isn’t mentally prepared to use it, all they are doing is potentially arming their attacker (or providing another gun if the attacker is already armed). 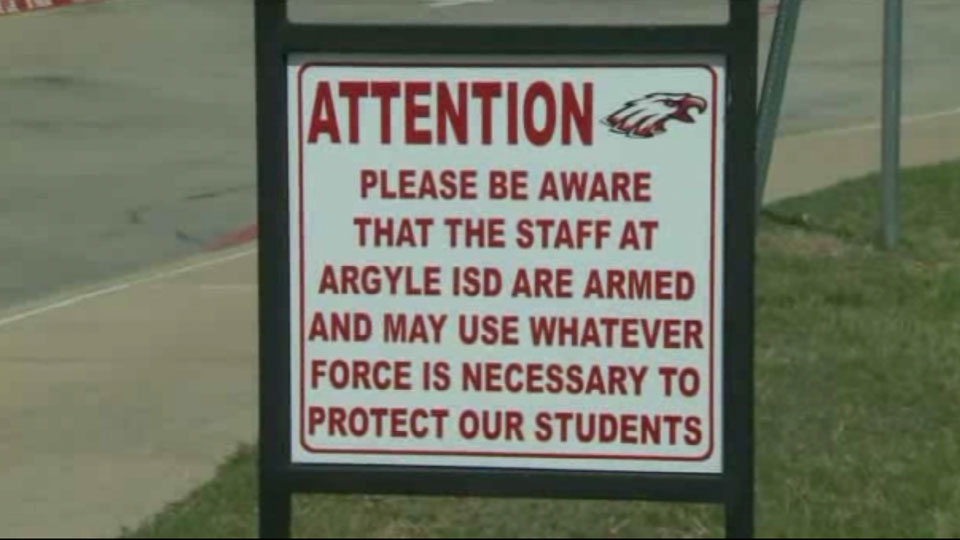 But I’m truthfully having a hard time finding fault with the Argyle ISD’s policy. Potential school marshals must already be licensed to conceal carry by the state. Then, they are put through a psychological evaluation. Once cleared mentally the marshals are given firearms and emergency response training. They will only be authorized for specific guns, and cannot carry any gun on campus they haven’t been qualified and trained with. Even the type of ammunition permitted is regulated to ensure it is designed to minimize ricochet and avoid unintentional injury.

As long as the weapons are closely guarded and the marshals are rigorously vetted and well-trained, the potential benefits seem to outweigh the possible harm. With school shootings happening frequently, if the presence of armed teachers on campus causes an attacker to think twice and hopefully move on, well, that’s a win in my book.

The district isn’t being shy about their gun-toting teachers either. Each school has posted a sign saying “Please be aware that the staff at Argyle ISD are armed and may use whatever force is necessary to protect our students”. That’s a far cry from the “No Gun Zone” sign at most other schools, and sends a much stronger message. Yep, we have guns and we aren’t afraid to use them.