Florida tween T.J. Guerrero has been selling lemonade in his neighborhood for two years. When news broke that his 61-year-old neighbor has been trying to shut down the stand, supporters flocked to the stand to the tune of $600.

Lemonade stands are one of those last vestiges of bygone days, when a quarter could get you a refreshing beverage and a smile from an enterprising child. You’d think that senior citizens would be all about cute kids trying to make a buck on a hot summer day, but Florida man Doug Wilkey does not approve. Over the span of two years, he’s reached out to City Hall and local police to try to get 12-year-old Guerrero’s stand shut down.

Clearly this guy hates fun, children and America. Commenters on a local story about the stand got feisty, quickly proving that the only thing that can unite us in this country is a shared hatred for curmudgeons. “Doug Wilkey sounds like your typical whiny member of the local Tea Party obsessed with his property values,” says one commenter. Don’t worry, it wasn’t sided. Someone else quickly chimed in, “#obamasfault.” 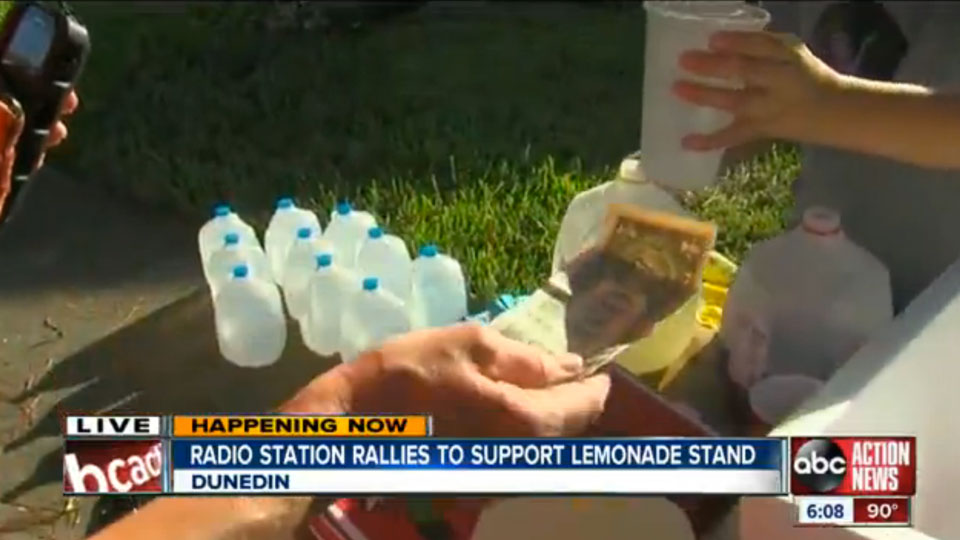 Wilkey’s emails are pretty great. “The city could possibly face repercussion in the event someone became ill from spoiled/contaminated food or drink sales,” he wrote, as if grocery store brand lemonade is a leading cause of botulism death. The emails eventually devolved into unhinged caps lock and dozens of exclamation points.

Some of his complaints sound legit. He says that kids lit firecrackers and threw rocks. As someone who has literally called the cops on kids throwing rocks at cars, I understand the concern there. But according to the rest of the neighbors the kid is just operating a sweet, old-fashioned lemonade stand to make some spending money. He’s already earned himself an iPod with lawn-mowing money and lemonade stand money. Sounds like a cool, responsible kid.

Yesterday, a crowd formed around the lemonade stand, delighting Guerrero and his family and probably giving Wilkey more fodder for apoplectic emails. The stand, which is set up on a neighbor’s lawn with permission, made over $600 thanks to supporters who’d heard about Wilkey’s complaints. That’s a lot of money, but don’t worry — Guerrero is going to get his mom’s input before he decides what to do with it.

Lexi Underwood On Microaggressions, Gen Z & Her Own Fight for Social Justice

Quintessential Baby Names Beginning With ‘Q’ for Your New Cutie

2 hrs ago
by Amelia Edelman

Did This Mom Shame Another for Breastfeeding Her 6-Year-Old Son in Public?