When my son asks to have his nails painted, I paint them. It isn’t a political statement. I’m letting my 5-year-old express himself in a harmless, temporary way. If you’re offended, you’re the problem — not the nail polish.

At just 3 years old, my son begged to have his beautiful curls cut short. I cried at the hair place, but I honored his wishes. I believe that kids should be able to dictate how they want to dress and look within reason. For about a year, he preferred orange. I found him orange shoes. Recently, he only likes wearing basketball shorts. Luckily I have a lot of hand-me-downs from his brother.

My son also loves to have his toenails painted. I’ve been painting them whenever he asks for a couple of years. The weekend before he started kindergarten, he asked, “Mama, will you paint my top toenails?” I gently suggested that maybe it wasn’t a good idea to have his fingernails painted on his first day of school.

“Because people will make fun of me?” he asked, his shoulders sinking.

Watching my imaginative, sensitive, silly child give up on something so quickly broke my heart. “You know what?” I said. “People might make fun of you, but you can tell them that rock stars wear nail polish. It’s cool.”

I know that people think a boy wearing polish looks feminine. I’m not immune to meaningless associations. I’m ashamed to say that I steered him away from the “light red” he prefers. Was I trying to protect him, or was I buying into gender stereotypes? Probably a little of both.

I painted his fingernails silver. He chose five different shades of blue and green for his toes. On the first day of school, I asked him if anyone commenting on his polish. He told me that a girl simply said, “Your nails are painted.” That was it. It was a non-issue. 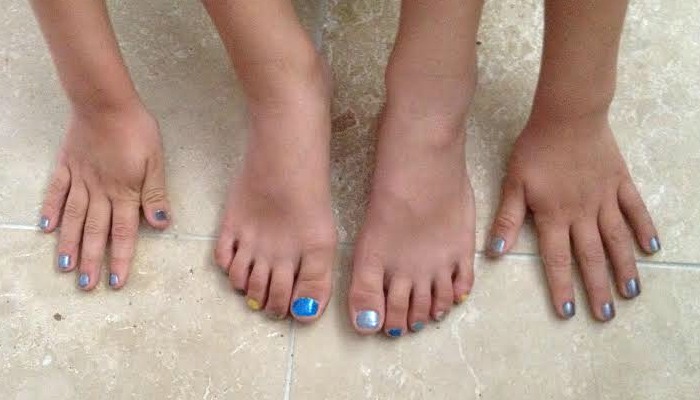 The only criticism I’ve gotten has been from adults. Even my son’s pediatrician pointedly said, “I see that his nails are painted.” Then she watched me closely, waiting for an explanation, as if the reasoning wasn’t as simple as a little kid wanting to try out a grownup’s nail polish.

My mom didn’t say anything negative to my son about his nails, but she let me know that she’s worried that allowing him to wear polish to school is setting him up for bullying. I understand her concern. But I reminded her that I can’t build a bubble around my kids — and I don’t want to. Every child is going to be teased. As long as he’s not being legitimately bullied, I’ll let my son navigate playground drama on his own. Though yes, I’ll ease him into it with silver polish instead of pink.

Polish can be removed in a matter of seconds. Plenty of kids will never have the ability to whisk away the things that make them stand out, the things that might get them teased. So no, my son’s shiny nails aren’t a life-changing learning experience. They’re not a crusade for equality or a statement to break down gender stereotypes. They’re just painted nails.

10 hrs ago
by Heather Marcoux