A baby picture on Facebook can teach people not to overshare but it can’t stop them from being stupid.

Ohio grandmother Jackie Sheaks thought it would be humorous and creative to post pictures on Facebook of her 2-month-old granddaughter with a pacifier duct-taped into her mouth and another of the baby in a roasting pan surrounded by vegetables. But no one is laughing. Particularly the local officers and children’s services representatives who have made several calls and visits to the house to investigate since the images went viral. We’re hoping this is a hoax like the whole KFC debacle.

The baby’s mother Kristin Spriggs defended her mother’s actions, saying that her older sister died in an accident about a year ago and the family did the “silly” photo shoot with the baby “out of love and as a stress reliever.” I’m not buying it. Out of stupidity, rather. 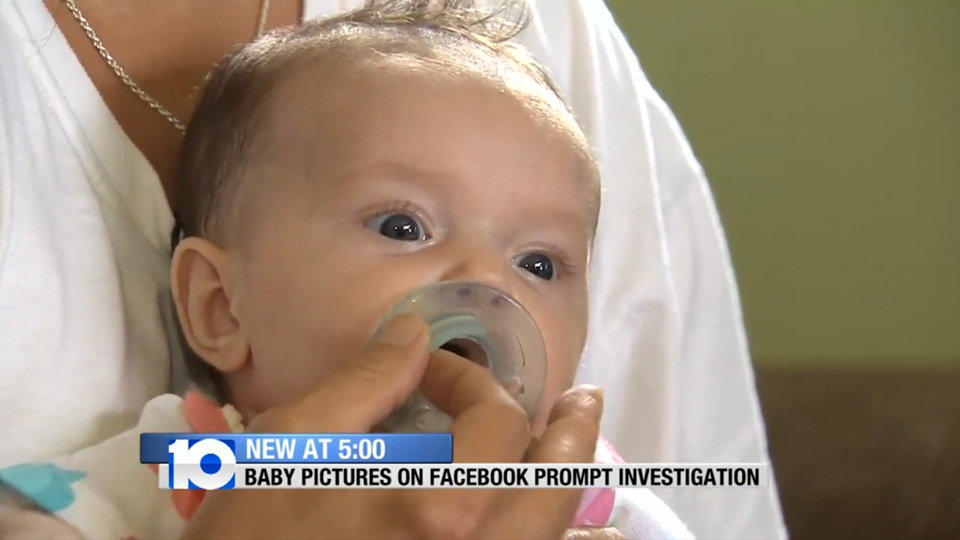 First, can we discuss how creepy the picture is of the baby with the duct tape on her face? The poor thing looks like a miniature Hannibal Lecter. And though Sheaks says they only had “a little tape” on the baby’s face for the time it took to take the photo, can you imagine the pain that poor baby felt on her fresh little cheeks when they took that “little tape” off? Duct tape hurts, yo. I’ve had my experience taping my boobs up for show, and I’m not going back down that road for anything.

And what happens if the baby ever comes across those photos as an older child or even as an adult? The words “scarred for life” come to mind. That is the fodder that makes kids socially awkward. All I can say is I hope that baby has the same sense of humor as her bizarre family.

Though originally laughing off the incident as a joke, Sheaks is now complaining that the backlash has “been a big toll on the family [and] we almost feel like we have to relocate. We’re not horrible people that they are making us out to be.”

Perhaps not. But the family should have been wise enough not to post pictures like that on a social network full of people that would simply not get the joke. Sheaks says she’s learned her lesson and won’t be doing anything like that again. We’re hoping she can get some inspiration from the likes of Anne Geddes the next time she wants to pose her grandbaby for a photo shoot.

Why Are Stores Selling Confederate Costumes for Kids?

35 mins ago
by Sabrina Rojas Weiss

16 hrs ago
by Amelia Edelman

New Dad Complains That Wife Spends Too Much Time Pumping — Is He Right?

20 hrs ago
by Amelia Edelman