Lands’ End sent select customers a subscription to GQ magazine as a bonus gift. Unfortunately for them, the scantily clad model on the cover went over like a fart in church. Moms took to the retailer’s Facebook page to express shock and dismay. 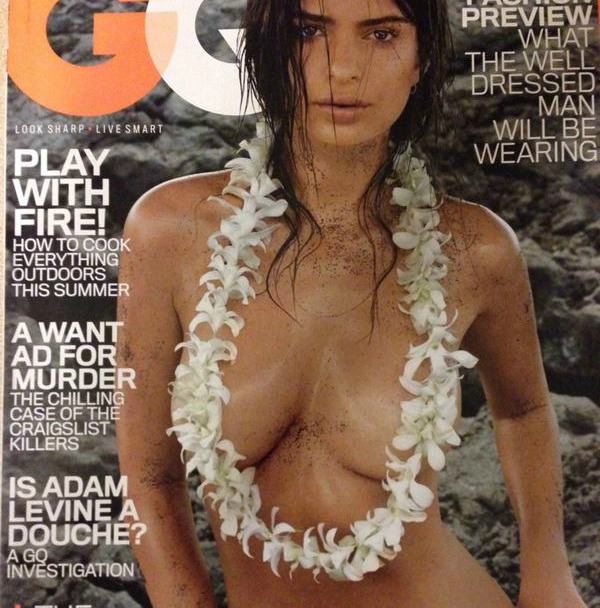 Usually when moms freak out about boobs, it has something to do with breastfeeding. Breasts, over-hyped and unnecessarily sexualized, give people a lot of feelings. This time, the boob controversy came in the mail, delivered by a family-friendly retailer known for school uniforms, winter wear and modest bathing suits. Unsuspecting Lands’ End customers received an issue of GQ featuring a model’s glistening, sandy breasts with nipples barely covered by a lei. The Lands’ End Facebook page blew up with outrage.

The model on the cover is definitely naked, barring strategically-placed flowers, but the pose is hardly pornographic. Are kids being raised with no concept of what a woman’s breasts look like? Are girls and boys fed the notion that nude bodies are dirty and shameful?

Even if an older kid ends up having some stirrings over the sexy image, it won’t be the last time that happens. Entertainment media is saturated with images of women’s bodies in various states of undress. If anything, use the moment of outrage as a teaching moment — not to teach kids that bodies and sex are dirty, but to talk about the male gaze and the disproportionate number of magazine covers that feature undressed women.

Boobs aren’t a big deal. If we want to normalize using them to feed our babies, we should chill out about cleavage and sideboob and slightly suggestive magazine covers. Our kids don’t deserve our hang-ups, they deserve to know that bodies are just bodies, capable of nourishing babies — and making babies.

Cruise line denies boy with cancer his much-anticipated family vacation
Missionary accused of abusing orphans isn’t as shocking as you think
Would you leave your kid in a park while you went to work?

15 hrs ago
by Emily Tisch Sussman