Happy Wednesday Hump Day — also known to us as Celebrity Baby Bump Day. We rounded up the cutest pregnant celebrities of the week including Rachel Bilson, who showed off her growing bump in an adorable black sundress. Hayden Panettiere bared her bump in a striped bikini, while Christina Aguilera bared all in a sexy pregnancy photo shoot. Pregnant Kourtney Kardashian and Kelly Rowland round out our list of the most adorable pregnant celebs.

Pregnant Rachel Bilson looked adorable in a black sundress as she went furniture shopping in Los Angeles with her mother last week. The Hart of Dixie star kept her look sporty by pairing her dress with white Converse sneakers and red sunglasses. 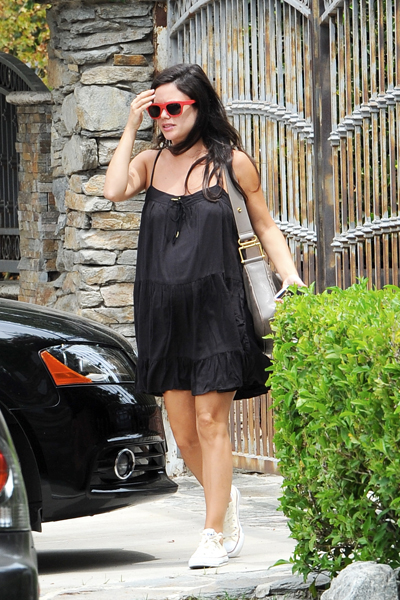 The 32-year-old is expecting her first child with her longtime boyfriend, Star Wars star Hayden Christensen.

The couple has yet to speak out about her pregnancy, however her costar McKaley Miller let it slip that she is expecting a girl. “I haven’t bought her anything yet because I feel like it has to be super special. She’s such a fashionista, it’s gotta so be cute and so perfect for her little girl,” she told HollywoodLife.com.

She also revealed that Bilson is due “sometime in the fall” and that the cast plans on throwing her a baby shower.

“We probably will end up throwing a baby shower because we will end up filming until the month or so that she has her baby,” she said.

Next up: Pregnant Hayden Panettiere bares her baby bump on the beach

10 hrs ago
by Amelia Edelman

14 hrs ago
by Racheal Pulver