“Mommy, what are we?” asked my 7-year-old son. We were sitting at the kitchen table with his 5-year-old sister and my husband. I knew why Mike was asking; he had heard his friends talking about their parents’ religions and diverse backgrounds. 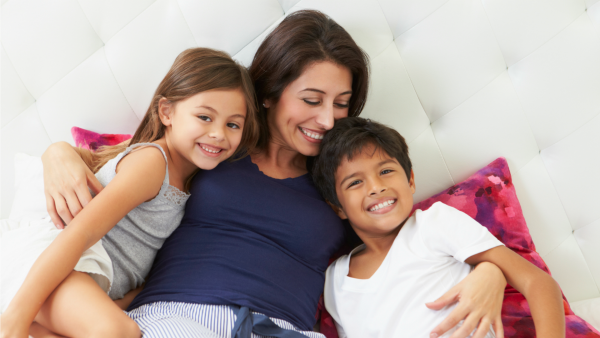 t I don’t know what came over me, but I assumed a serious demeanor and said, “Mike, I think you and Ella are old enough to know the truth.” It sounded like I was about to tell them they were adopted. My husband had no idea what I was doing, but he sat there quietly as I continued.

t “Your father is Catholic… and I am an alien. So you are half Catholic and half alien.” The kids’ mouths were hanging open. Mike later told me that he had been hoping they were adopted so that he wouldn’t have the same genes as his annoying little sister.

t I continued to improvise: “In alien families, there is a marker person in each generation so that all the aliens will be able to recognize each other. My father’s name is Allan, and that name is spelled almost like ‘alien.’ In my generation, I am the marker since my initials are A.L.N. and if you say A.L.N. really fast it sounds like ‘alien.’ Ella, your middle name is Anne. If you say Ella Anne really fast, what does it sound like? It sounds like ‘alien.'”

t Ella piped up: “Abigail is an alien too!” Abigail was Ella’s best friend.

t Boy, did I get lucky. “That’s right, Ella. Abigail’s last name is Lowin, and she is the marker person in her family, since if you say “A. Lowin” really fast it sounds a lot like ‘alien.'”

t By then, the children had caught on to the fact that I was kidding, but we had started a wonderful new family tradition. The kids told everyone that their mommy was an alien. In fact, Mike even got in trouble for it at school until I told his teacher that I really was an alien. We ordered a vanity plate from the Connecticut DMV and everyone at school knew that Mike and Ella’s mom drove the “AlienMobile” with the ALIENS license plate.

t Jane Austen said, “Children of the same family, the same blood, with the same first associations and habits, have some means of enjoyment in their power, which no subsequent connections can supply.” She was right about that. It’s the funny little traditions that tie siblings together. My kids are grown now but they still love to tell the story about when they found out that they were half alien.

t I think there is a tiny part of them that still believes that their mom really is an alien.

t Read another story about sibling traditions in “The Penny Puppy” from Chicken Soup for the Soul: Tough Times, Tough People.