Flying as a single mom with kids can be scary. See my five tips for doing it with ease. 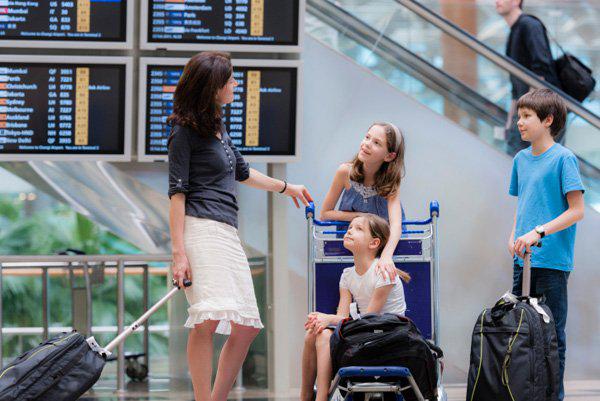 t Recently I embarked on a four-hour flight with my three young children. It went amazingly well despite the fact that I had odd-hour flights and had never flown with my three kids alone. For weeks I worried, planned, scratched that plan and hoped that I would be able to keep up with three small children in a crowded airport and that they would be well behaved on the plane.

t It turns out, the planning was the biggest thing. I made specific adjustments in anticipation of flying with my girls and I truly believe that those adjustments were totally worth it. So I thought I would share with you some things that worked for me.

t Generally flights that are non-stop are more expensive. I also found that the airline I chose only had non-stop flights at odd hours. But the flights during “regular” hours not only had stops, most had plane changes and it sent a cold sweat down my back to think of switching planes with kids. So, I chose a very early 7 a.m. flight on the way out and an 8 p.m. flight on the way home. The morning flight meant I had to have everyone up and out the door by 4:30 a.m. and the evening one had us landing at 1 a.m. But I have to tell you, the non-stop flight was the key to success for this trip. One takeoff, one landing and no rushing through an airport saved me a lot of stress.

2. Use a car service

t I know this is an extra expense but if you can absorb it, it is absolutely the way to go. I hired a car service so that the girls and I did not have to mess with a parking lot shuttle, were not walking for too long and did not have to return to the car while it was dark. For my own safety, and theirs, a car service took away the stress of driving, the cost of parking, the long walks and the apprehension of protecting all three of my girls in the dark. Plan to spend between $150 to $200 on a car service. It is totally worth it though. *Check your state laws about car seats. Mine did not need them in a limo or large sedan.

3. Pack a carry-on for each child

t It may seem that four carry-ons for the girls and me would not be necessary. But I decided all four of us would carry backpacks anyway. It turns out, the backpacks were filled with things that saved me as a mom. I packed snacks, blankets, a favorite toy, books, brand new coloring books and crayons in each one. They were not heavy so the girls could manage OK; if they got heavy, I put them on the back of the umbrella stroller, and each one had something to do the entire four-hour flight.

4. Save electronics for the dire moments

t There was no way that I was going to let my girls play on a tablet for four hours straight. Nor would that sustain their attention. So I decided to pack them in my backpack just in case we hit a rough patch. That rough patch never came, really, not in the screaming, “Mommy, I want to get off this plane” way. It came when three hours or so of the coloring was boring, the books were read and the excitement over being strapped into a small seat way up in the air was done. When the questions started I whipped out the tablets and they got to the landing with no issue at all. I firmly believe that if they had had them all along, the interest would have faded and they would have been useless on the long flight.

t The day before the flight I called the airline to see what was and was not OK to take for my kids. I did not want to incur additional baggage fees if I could avoid it, nor did I want to deal with a ton of things I did not need. I asked what identification I would need for each child and if it was OK to take my double stroller to the gate. I was told that the stroller would have to be checked, an additional $35, before I went through security. Since the point of the stroller was so my 4-year-old did not have to walk through a large airport, I asked what I could do. They told me that umbrella strollers were able to be rolled to the gate, stored on the plane and that they would be available upon exiting the aircraft. I chose a stroller with a hanging bag on it and it was the one thing that I could not travel without with multiple kids. Not only did my girls switch off when they got tired, but the bag held food and water while waiting at the gate and the handles held backpacks that got too heavy.

t Traveling can be scary as a single mom. The concern over keeping up with kids, things and the schedule is a juggling act. But I did it with three young girls and they were so well-behaved that people actually stopped me and told me how amazed they were. I truly believe that these simple things made all the difference. So take the time, plan it out and you and your kids will be just fine too.