If you have a choice and you’re told more than 90 percent of people choose A over B, are you more likely to choose A? Do you wonder what’s wrong with B? Do you think, “My God, I had no idea B was such an unwanted choice!” But what if that trumpeted percentage was entirely false?

My son, who has Down syndrome, was almost a year old when I read from a reputable nonprofit’s brochure that more than 90 percent of babies with Down syndrome are aborted.

The concept hurt my heart and shocked me. For a nanosecond of a split nanosecond, I questioned our choice. Which is ridiculous because I wouldn’t give up my son for anything in the universe. When I learned several years later that the statistic was flat-out false, I got angry.

I was angry that an inaccuracy caused me even a moment’s doubt. I was angry because I know I’m strong and my husband and I were on the same page from the moment we learned we were expecting: this was our baby, our future. We would do everything we could to cherish our child.

But not everyone has such convictions or such a supportive relationship. And so I became even angrier, thinking of the individuals who would receive a prenatal diagnosis and then be left flailing, without updated information or a morsel of support.

Every woman deserves to receive accurate, updated, unbiased information upon learning of a prenatal diagnosis of Down syndrome. Period.

When the American College of Obstetricians & Gynecologists (ACOG) changed its recommendations about prenatal testing for Down syndrome in 2007, it emphasized that obstetricians should be “well-informed” about Down syndrome and provide the “natural history” of Down syndrome when delivering a diagnosis.

Instead, women report experiences that typically fall into two categories: OBs assume parents who discover their unborn child has a genetic abnormality will want to terminate the pregnancy. Start again. Clean slate, and all that. So they transition the conversation in that direction.

Alternately, a blanket of pressure smothers the expectant parents, as Down syndrome advocates rush to influence them much like the segment of lactation consultants known as Nipple Nazis barrel into postpartum emotions with large doses of guilt, pressure and judgment.

I’m not here to rally against abortion or champion pro-choice. I desperately long for the day when a woman receives all the information she needs to make an informed choice to either continue the pregnancy or terminate.

These organizations, sources close to the decision makers say, buckled to pressure from self-advocates who insisted that using the word “termination” — merely mentioning it — is offensive and disrespectful.

I want to honor and respect the opinions of individuals with Down syndrome; my son is one of those individuals. But if an organization purports to support women with a prenatal diagnosis, credibility is diminished — if not entirely lost — if the only information they provide pushes an agenda. True support must be accurate, thorough and unbiased.

Despite its withdrawn support of Lettercase, NDSS does include the following language on its website:

“NDSS recognizes that there are several reasons that one might choose to undergo prenatal testing and screening, which can include: advanced awareness on Down syndrome, adoption, or termination. In all cases, upon receiving a positive diagnosis of Down syndrome, the woman and family should be provided with accurate, up-to-date, and balanced information about Down syndrome.

“Above all, NDSS strongly believes that through public awareness, education and advocacy, health care professionals, policymakers and society as a whole can help ensure that people with Down syndrome are increasingly valued, accepted and included.”

I spoke recently with a health care professional who deals with high-risk patients every day. This professional asked to remain anonymous because of a policy not to speak with media unless the interviewee’s words are vetted by PR folks. That’s standard policy for organizations, but when it comes to a matter of life and death, society deserves unfiltered opinions. The truth doesn’t always feel warm and fuzzy. But it must be shared.

“I do always bring up the subject of pregnancy termination with any patient whom I see with what would be considered a ‘significant’ issue,” the health care professional shared. “This includes fetuses with chromosomal abnormalities, major heart defects, neural tube defects, etc.

“I think it is my responsibility and obligation to make sure patients are aware of their options, and the standard of care requires that patients be advised of this option.

“That being said, it has to be done in a manner that communicates to the patient that I am not advising them to terminate, but only that they are aware of their options. The vast majority understand where I am coming from. And some patients express relief, because it gives them ‘permission’ to discuss the option.

“My gut feeling is two out of three patients who receive the prenatal diagnosis of Down syndrome continue with the pregnancy. Certainly, it is the minority of patients who terminate. I tell patients it is my role to support whatever decision they make.”

How, then, has this “90 percent terminate” statistic developed and perpetuated over the years?

Mark Leach is an attorney with a master’s in bioethics who has presented internationally to obstetricians, medical geneticists, genetic counselors, bioethicists and Down syndrome support organizations. His blog, Down Syndrome Prenatal Testing, is a continuation of his efforts to provide perspective and resources for informed decision making for those involved in the administration of prenatal testing for Down syndrome.

“When I present at medical conferences, almost universally OBs are quick to say that their patients never terminate. Yet, we know that remains what many women choose to do following a prenatal diagnosis — we just don’t know the exact percentage. So, the blind spot on the true abortion rate I think is surprising.”

Making sense of the stats

Leach shares another shock his research uncovered: “[It’s] counterintuitive… to learn that the abortion rate is less than the traditionally quoted ’90 percent,’ but that really means there are even more selective abortions for Down syndrome than when the rate actually was 90 percent.”

Confused? Hang in there. I hate wrangling with statistics, too, but getting this one right can save lives.

“This is because of the confusion between ‘rates’ and ‘actual numbers,'” Leach explains. “A rate is a percentage of a whole. When the rate was 90 percent, it was when only women 35 and older were routinely offered prenatal testing for Down syndrome. That accounts for only 20 percent of all pregnancies in America.

“Prenatal testing has become easier, earlier, safer and cheaper,” Leach points out. “And, yet, women still are not receiving the accurate information about what a life with Down syndrome can be like or the reassurance that there are public and social supports to help them care for their child.”

The Down Syndrome Guild of Greater Kansas City released this one-pager analyzing and debunking the “90 percent” myth. 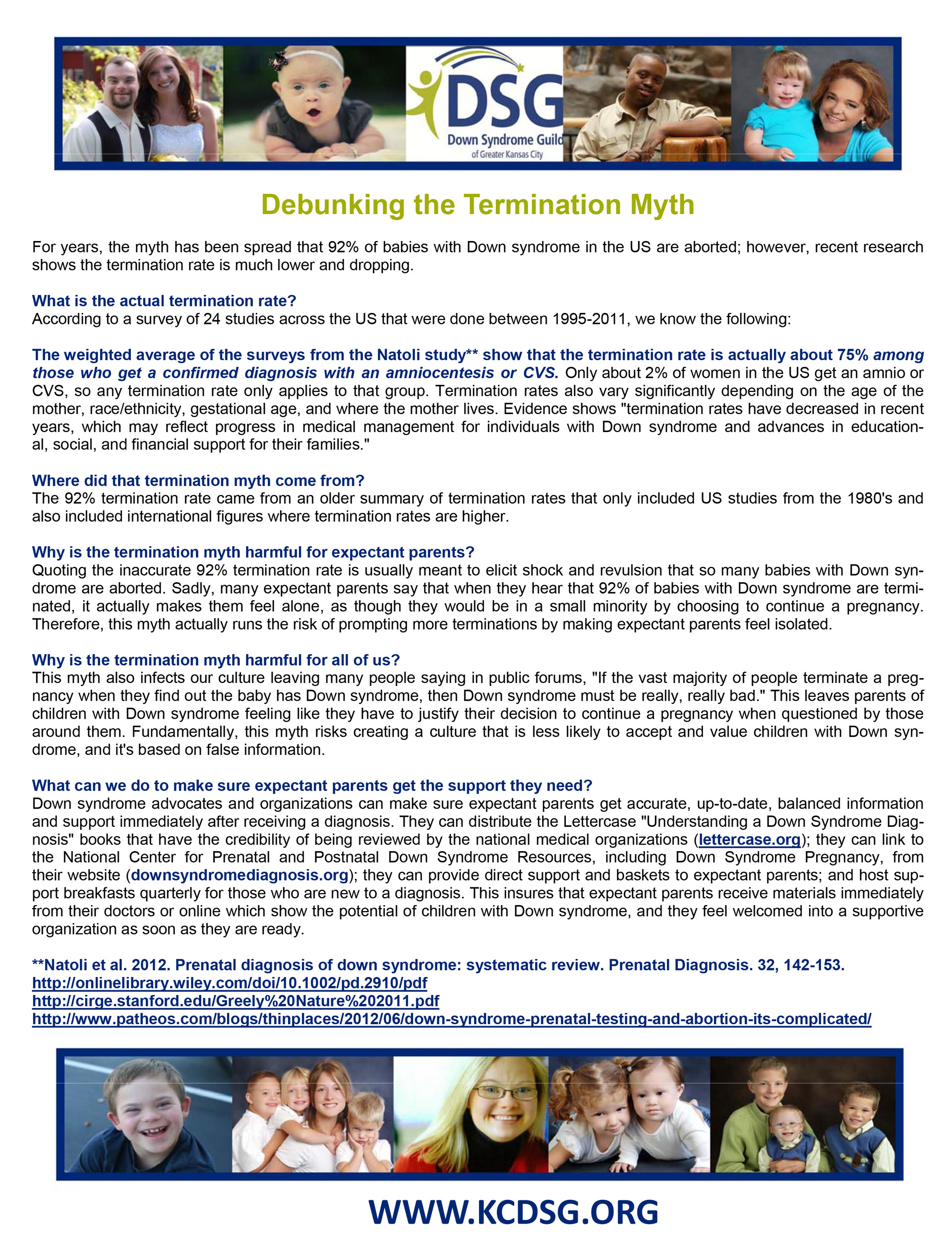 So, what’s the solution? How do we combat erroneous statistics with fully informed truth? Success demands a village approach: Health care professionals, genetic counselors, Down syndrome organizations and parents ourselves must take up this fight for accuracy.

“Every parent of a child with Down syndrome should appreciate that whatever the termination rate, it is high enough that for every face you see that has Down syndrome, there is another life that was aborted,” Leach emphasizes.

“If you believe Down syndrome has a place in our society, if you believe (as studies support) that those with Down syndrome make the world a better place, I would hope parents would recognize the challenge posed by the termination rate and want to do something about it.

“My recommended ‘something’ is becoming active in their local Down syndrome organization, receiving training on responsibly counseling new and expectant parents and making effective outreach to the medical community, and donating to organizations committed to providing the recognized resources to expectant families, like the National Center for Prenatal & Postnatal Down Syndrome Resources.” (Leach holds a paid position at the National Center.)

Read more about Down syndrome

42 mins ago
by Kristi Pahr