Happy Wednesday Hump Day — also known to us as Celebrity Baby Bump Day. We rounded up the cutest pregnant celebrities of the week including Mila Kunis, who showed off her baby bump in a little black dress on the red carpet. Newly pregnant Kourtney Kardashian was spotted in overalls, while Scarlett Johansson shows off her baby bump for the first time in several months. Christina Aguilera and Stacy Keibler round out our list of the cutest pregnant celebrities of the week.

Not really one to flaunt her baby bump, pregnant actress Mila Kunis wore a loose baby doll black dress as she attended the premiere of her new movie, Third Person.

Kunis, who is expecting her first child with fiancé Ashton Kutcher, paired her black dress with gold and emerald jewelry and nude pumps to the Third Person premiere, which also stars James Franco, Olivia Wilde and Adrien Brody. 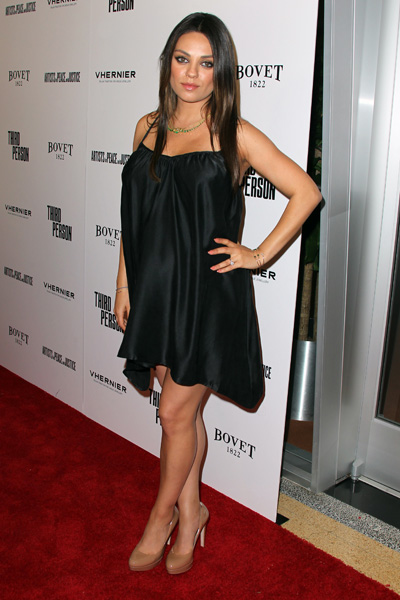 Although Kunis won’t give an exact due date, she told Ellen DeGeneres during an appearance on her show that the baby would be born, “sometime this year… I promise you.”

That (sort of) narrows it down. She also confessed that she actually hid her pregnancy for quite a while before they decided to announce it.

“We were actually able to hide it for a very long time. I know. It’s amazing,” Kunis said.

And as far as pregnancy cravings?

“I’m very stereotypical. I eat sauerkraut all day long. Here’s the truth,” said Kunis, who was born in the Ukraine. “This is the worst craving to have because sauerkraut smells and so every time you open up a jar it just reeks in the whole kitchen… It’s not like ice cream where everything smells lovely.”

Next up: Pregnant Scarlett Johansson shows off her large baby bump