Facebook’s policy on breastfeeding photos was updated three weeks ago without fuss or fanfare, yet a popular user’s tandem breastfeeding picture was removed for violating it.

Related story You're Not Alone: When Breastfeeding Makes You Feel Sad

Moms have been upset with Facebook’s handling of breastfeeding photos for ages, it seems. While images of near nudity are allowed to remain on the social media platform, breastfeeding photos are often removed — yet the policy doesn’t always seem to support these deletions. Now, however, the rules have been rewritten. But for some, it doesn’t make a difference, like this mom whose tandem nursing photo was just removed. 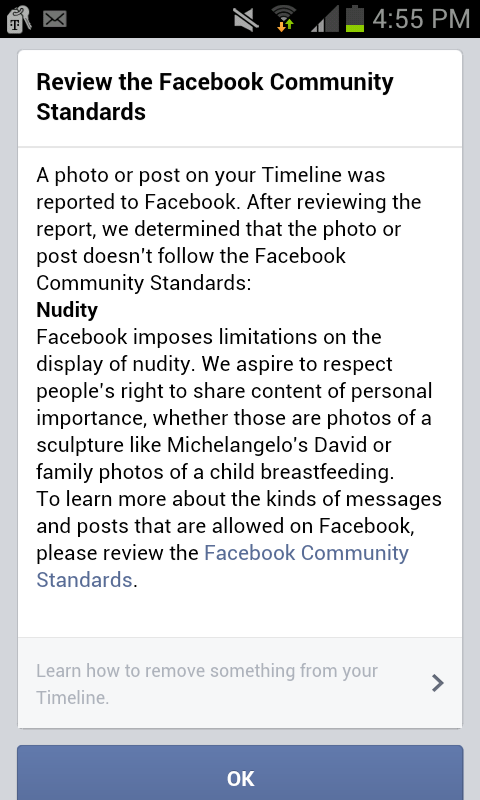 Facebook has had a long-standing policy that has allowed breastfeeding photos to remain on the site, but photos that showed a fully-exposed breast upon which a child is not actively nursing do violate the rule. This rule hasn’t been equally applied, however, because breastfeeding photos have been removed that are supposedly allowable by these terms.

Hope is on the horizon, however. Breastfeeding advocate Jodine Chase has expertly outlined the changes and notes that the “actively nursing” clause to the terms has been removed. This means that even if a mother’s breast is exposed, the photo should not be subject to removal.

“I am so thankful that they are finally moving in the right direction, away from shaming women for having female nipples,” shares Paala Secor, breastfeeding advocate. “Now breastfeeding mothers like myself are allowed to share our nursing photos without meticulously cropping out or blurring our often exposed other nipple.”

However, it remains true that photos are most often reported by one’s own friends, family members or fanbase of a user’s page. And it’s also true that human beings are the ones behind enforcing Facebook’s policy, and interpretation can come into play when deciding whether to remove a photo or not.

This still doesn’t explain why Abby from The Badass Breastfeeder had her tandem breastfeeding photo removed. Even if one of her boobs was exposed, or part of a nipple was in view, the photo should have passed the test according to Facebook’s own policy. And the kicker? There was no exposed nipple. 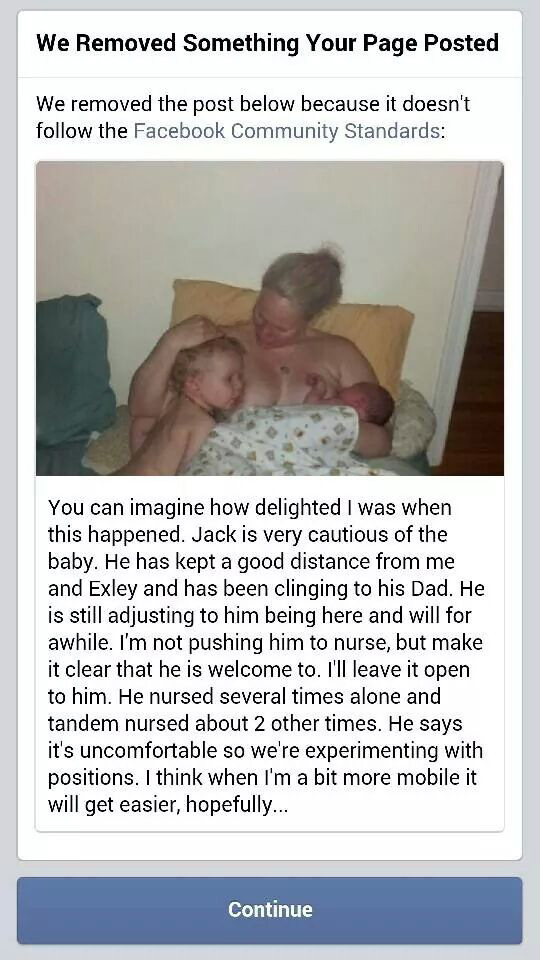 Facebook doesn’t always just remove images, either. Additional punishments are doled out, often in reflection of how many prior infractions the user has collected. Sometimes users are banned for a short period of time, such as a full-day ban, and sometimes they are banned for 30 days. And if photos continue to be reported and removed, users can face being permanently removed from the site.

This is nothing new to Abby, unfortunately. “I have been banned a bunch of times from my page over the years,” she tells us.

Secor is outraged at this removal. “I am appalled that Abby’s photo was taken down, especially since the reason she was given was ‘nudity,'” she says. “I find it offensive when nudity is used to describe bare skin. To me and the dictionary, nudity is the full exposure of the body. I don’t see that in Abby’s photo.”

Chase contends that there is speculation that it was the waist-up nudity of Abby’s older child that prompted the removal, but at this time it is merely speculation and nothing more — there have been no specifics offered by Facebook as of this time.

While the policy change is a step in the right direction, it may take some time for the new rules to be embraced by those who are able to delete photos and ban users.

5 hrs ago
by Hannah Van Sickle