The day after 15-year-old Matt Gfeller died, his parents noticed a hummingbird buzzing around their outdoor patio. Bob and Lisa watched the hummingbird linger throughout the entire day and, at one point, buzz very close to Lisa.

A tiny, persistent bird brought incredible comfort during the couple’s first hours without their larger-than-life, persistent son. “We believe that that little bird was sending a message from Matt that he was fine where he was,” Bob shares.

That positive outlook is a family trait, and Matt carried that spirit with him in everything he tackled — right up to his very first varsity football game and the helmet-to-helmet collision that ended his life in August 2008.

As No. 57 lay on the field, “I remember looking at Lisa and saying, ‘That’s Matthew. And he’s not moving,'” Bob shared later in an online video. The accident happened on Aug. 22. On Aug. 24, surrounded by loved ones, Matt was taken off life support.

“We support the role athletics can play in our kids’ lives, but believe that head injuries can be minimized through better equipment, training, diagnosis and early treatment. We simply want kids to play it safe.”

The Gfellers describe their fun-loving, determined youngest son in a video that introduces people to the family’s dedication to traumatic brain injury (TBI) research and treatment.

“Matt was a very curious and passionate child and young man,” Bob tells SheKnows. “When he put his mind to something, he set his goals and worked hard to achieve them. Of course, at the time of his death, football was his main goal. 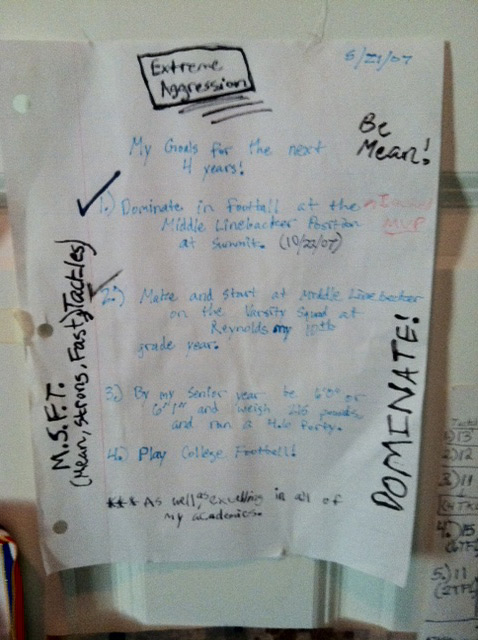 The Gfellers shared a photo of a motivational note Matt posted on his bedroom door on June 21, 2007, listing his athletic goals (“Dominate!” and “Play college football!”) and including perhaps a bit of an afterthought at the very bottom: “As well as excelling in all of my academics.”

That note remains on Matt’s door today. “We use his room as the Matthew Gfeller Foundation office,” Bob explains.

Matt’s ability to motivate others blossomed during his short life and has downright exploded in his memory.

The annual Matt Gfeller Memorial Doughnut Run is a 5km run or walk created by Matt’s three best friends who “wanted to commemorate his fun loving spirit and his love for Krispy Kreme doughnuts,” Bob explains. “They dreamed up the idea and over the five years of the race, many of our friends and family have helped put it together to raise awareness for TBI and all that families can do to be better informed on the prevention side.”

The event also serves as a fundraiser, with proceeds divided to support the work at the Matthew Gfeller Center at UNC (more about this in a moment) and the Childress Institute for Pediatric Trauma at Wake Forest.

These were shared with us by the Matthew Gfeller Foundation:

Beyond the Doughnut Run

As you probably guessed, Matt’s legacy doesn’t end with a lot of running and some really awesome Krispy Kreme doughnuts (a race in which this writer has participated as a walker, because to me, any running is a lot of running).

In May 2010, the Gfellers attended the dedication of the Stallings-Evans Sports Medicine Building, which houses the Matthew Gfeller Sport-Related Traumatic Brain Injury Research Center, the “first and best of its kind on the campus of the University of North Carolina at Chapel Hill, right across from Keenan Football Stadium,” the Foundation website says.

Matt didn’t live long enough to achieve his goal to play college football, but what his life and the circumstances of his death inspired will unquestionably benefit more lives than a college football stint ever could (although surely it would have been a h***uva stint).

In fact, Bob and Lisa advocated for the Gfeller-Waller Concussion Awareness Act to protect the safety of student athletes in North Carolina. The act was signed into law on June 16, 2011, by Gov. Beverly Purdue. It focuses on three areas: education, emergency action and post-concussion protocol implementation and clearance/return to play or practice following a concussion.

“I am now working for Matthew”

In April 2014, Bob became executive director of the Childress Institute for Pediatric Trauma in Winston-Salem, North Carolina, after more than 30 years in branding and retail marketing — most recently as an executive vice president for Lowe’s home improvement stores.

“The decision to move on from Lowe’s evolved over the period of years since Matt died and also while our other children grew and matured through their stages of life,” Bob reflects.

“Working in the TBI world for those many years opened up a lot of new hopeful ideas for me and also opened a huge network of people who all wanted to help with our work, including the Childresses and the team at the Childress Institute,” Bob says. “The move away from Lowe’s evolved as we continued to do more work in the TBI area. Then, when the Childress Institute started a national search for a new executive director, I put my name in the hat.”

For Bob, the final decision didn’t come easily and yet… it did.

“Overall, for work and life, it is the right decision,” he shares. “I am now working for Matthew and for all of the other victims of pediatric trauma. I know he is both proud and smiling from heaven and I bet he has a lot of questions he wants to ask me when we meet again.”

Loss for Lowe’s is gain for research

As a former employee at the Lowe’s corporate office, I reacted strongly upon hearing of Bob’s departure. His energy and positivity created an aura around him, from the hallways to conference rooms to the sales meeting stage, which gave us all a heightened sense of possibility. His email sign-off said it all: “Stay inspired!” preceded his signature, “BG.” Just seeing Bob in the halls could brighten a stressful day, because he greeted everyone warmly and personally.

I wasn’t the only one sad to see him go while also inspired by his decision.

“Although Lowe’s was disappointed to lose Bob and the leadership, expertise and insight he provided, I am incredibly proud of Bob and the decision he made to pursue his purpose in life,” Lowe’s president and CEO, Robert A. Niblock, shared with SheKnows.

“Being a father, I cannot imagine the inner struggle Bob has dealt with in the years following the tragic loss of Matthew. I am happy for Bob and Lisa and I am confident that Bob’s leadership at the Childress Institute will have a meaningful impact on reducing pediatric trauma. I wish him much success in this important and meaningful chapter of his life.”

Bob knows it’s the right move. “How could it not be right?” he says. “Taking the path of life to serve others and help save and improve the lives of children. How can one not support such a move and want to help?”

Bob and Lisa Gfeller offer this advice to all parents:

“Flow with the day”

Today, the Gfeller family remains a united force. “We are a very strong family,” Bob says. “Have been and continue to be. We have faith that God is caring for Matthew better than we can here on earth.”

Matt’s older brother and sister “are doing super,” Bob shares. “Robbie is 24 and Haley is 22. We take care of each other and also celebrate the life we have.”

“For me, a big learning from the loss of Matt is that we are really not in control of our life. Things happen good and bad and it is best to flow with the day as it comes and goes. Try not to plan too much, as it may not work out that way.”

That’s a tough lesson for someone so inspirational and hope-driven. But Bob’s new reality doesn’t diminish his positive, calming spirit. When the weather warms, the family finds peace amid some new friends.

“We have since dedicated a lot of our outside space for the feeding of hummingbirds,” Bob shares, remembering the day after Matt’s death. “Matthew is all around us, as are the spirits of all of our loved ones.”

The Gfellers recommend these resources:

The best non-team sports for kids
Team sports: How kids benefit from organized athletics
Soccer may cause brain injuries: Will you still let your kids play?

58 mins ago
by Arielle Tschinkel