Scandal star Kerry Washington welcomed her first child, a baby girl named Isabelle Amarachi Asomugha, a few weeks ago. The actress, who has taken a few tips from her on-screen character Olivia Pope, rarely talks about her private life. However she did take to Twitter on Mother’s Day to thank her fans for all the love. 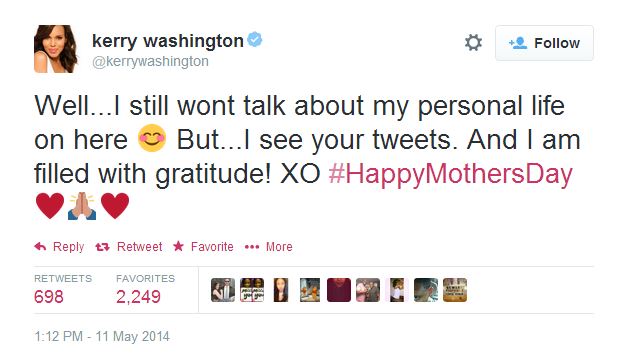 She also wrote a message to her fans that same day. “To ALL moms all of you, of all kinds and in all ways…HAPPY HAPPY HAPPY MOTHER’S DAY! XO”

Washington married football player Nnamdi Asomugha in a secret ceremony last June — and rarely talked about her pregnancy, despite the fact that her maternity style was to be envied.

We are still holding out hope she will post a picture of baby Isabelle!

How did Kim Kardashian spend her first Mother’s Day? With daughter North West, of course. The reality star shared this adorable photo of her holding her daughter over her head with the caption,

“This little girl has changed my world in more ways than I ever could have imagined! Being a mom is the most rewarding feeling in the world! Happy Mothers Day to all of the moms out there!”

What did her fiancé, Kanye West, get the girl who already has everything for Mother’s Day? Apparently you get her a giant wall of flowers.

“I woke up to a wall of roses, hydrangeas and peonies!!! I have the best fiancé in the world! I love you so much baby!!!! #HappyMothersDay,” she captioned the photo, later posting this shot of North in front of the wall.

And what exactly do you do with a giant wall of roses? If you are Kim Kardashian, the answer is pretty simple:

“There’s a wall of roses in my backyard what else am I supposed to do ?!?#ImpromptuPhotoshoot,” she wrote, sharing this photo of her posting in a white lace gown.

Kim K didn’t make Mother’s Day all about her, she shared a post of her mom, Kris Jenner, in a swimsuit with the caption, “I have the hottest mom! LOL This was her after 4 kids!!!!! My hero!!! I am me because of you!!! Thank you for showing me what compassion, strength and family means!!! I love you.”

Kerry Washington wasn’t the only celebrity that recently welcomed a baby. Kristin Cavallari welcomed her second son and made the announcement via Twitter.

She also posted this shot on Instagram of her hospital bracelet wrapped around baby booties sitting on top of a blue and white beanie.

Since we are on a baby roll, we might as well continue. Actress Emily Blunt and her husband, The Office star John Krasinski, welcomed daughter Hazel 3 months ago — and the actor shared the adorable first picture via Twitter.

Pics of kids should only come direct from parents. So I’m thrilled to introduce you guys to Hazel!!! #NoKidsPolicy pic.twitter.com/qVvUTRdllP
— John Krasinski (@johnkrasinski) May 13, 2014

Krasinski also tweeted the baby announcement on Feb. 17, writing, “Wanted to let the news out directly. Emily and I are so incredibly happy to welcome our daughter Hazel into the world today! Happy bday!”

Ellen DeGeneres replied to his tweet, in the hilarious way only she can, writing,