Stephanie Greene’s baby died, and the court says it’s because her breast milk was tainted with a fatal amount of morphine. Was justice served, or are we focusing on the wrong thing here?

Related story Lindsay Arnold Gets Candid About Her Breastfeeding Pain 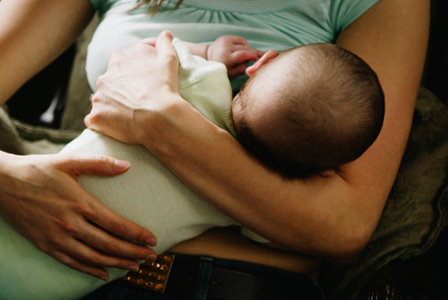 It’s a tragic tale — a mother is sentenced to 20 years for the death of her baby, who died from an apparent overdose of morphine. What’s unusual about this case is the court contends that her breast milk was to blame. While the nation’s eye has been strongly on the breastfeeding aspect of the story, the real focus needs to be somewhere else.

Stephanie Greene, 39, was sentenced to 20 years for homicide by child abuse. Her crime? Delivering a fatal overdose of morphine to her 6-week-old baby girl. The method? Breastfeeding her baby. Autopsy results revealed that the baby had enough morphine on board to kill an adult, and as there were no needle marks on her, then she must have gotten the medication through her mother’s milk.

Greene unfortunately has a history that works against her. She was in a near-fatal car accident a decade ago that has left her suffering from chronic pain, and she then lost her nursing job in 2004 for trying to illegally acquire drugs. It was reported that she hid her pregnancy from her regular doctor so she could continue getting narcotic painkillers, and as a nurse, she should have known the risks she was taking by continuing to take the meds and breastfeed her child.

Focus on Mom, not breastfeeding

This case has all of the sensational elements designed to simultaneously tug at our heartstrings while we condemn a mother. Greene should have known that her breast milk was unsafe for her infant to consume, and therefore she was a bad mother who killed her baby. Case closed, right?

Well, maybe not. We spoke with Jay Gordon, M.D., IBCLC to get some expert insight on what is clearly a heartrending story. He agrees that too much emphasis is being placed on the breastfeeding and medication angle, and not enough on Greene’s situation herself. “The focus of the coverage in this case should be a sad, underserved mother who was getting improper medical care, and not breastfeeding,” he explains.

Greene fell through the cracks, and even though she has a medical background and knew how to “work the system,” many feel that more care should have been taken by her team of physicians to help her manage her pain while parenting her baby.

Did breastfeeding really kill this baby?

One of the major points to the story is that the baby’s morphine levels were so high. If they were high enough to supposedly kill an adult, how is her mother possibly still alive? As with any medication, the rate that it transfers to breast milk is quite small. So how could this, from a medical standpoint, really have happened? “When reading the news stories on this case, I was skeptical that the baby overdosed from drugs in the mother’s milk,” muses Rachelle, owner of Unlatched. “The amount of drugs that gets into milk isn’t very high — it’s a small percentage. I would assume that the mother would have had to ingest a lethal amount for herself for it to have caused the levels found in the baby.”

Dr. Gordon says there are two possibilities. “Either she had such a high tolerance herself that there was accumulation, over time, in the baby, or she accidentally (or unfortunately, purposefully) poisoned the baby,” he explains. He stresses that this single case of a drug-addicted mother has no bearing on how non-addicted mothers use medications while breastfeeding — including narcotic painkillers, which are commonly prescribed after childbirth.

Is breastfeeding while on medication safe?

He does worry, as many of us do, that this situation and the media it has garnered might make other mothers hesitate to reach out if they’re in medical need, or that they may give up breastfeeding even though there isn’t cause to. “There are virtually no routine medications that are unsafe for infants over 3 weeks of age,” he says. “Obviously, talk with your doctor, but if your doctor tells you to quit breastfeeding so you can use a medication, get a second opinion.”

He also suggests that mothers should empower themselves when seeking medical care. “Many mothers ask the question backwards when approaching their doctors,” he shares. “Instead of, ‘Can I keep breastfeeding while taking this medication?’ They should instead say, ‘I’m breastfeeding, give me a medication that I can use.'”

In any case, we may not know exactly how Greene’s baby received a fatal dose of morphine, but spending time judging her makes no difference. The loss of a much-loved infant and the relegation of a mother to jail is the sad story here, and lessons can be learned from her terrible experience.

Why do some moms choose marijuana during pregnancy?
Breastfeeding “tramp” responds to bullying
Delta’s breastfeeding “policy” on Twitter creates uproar