Even after they are capable of sleeping through the night, toddlers can get into the habit of waking up at night to nurse. As you would expect, this can be hard on the moms they cherish, so getting a handle on night weaning is a goal of many. 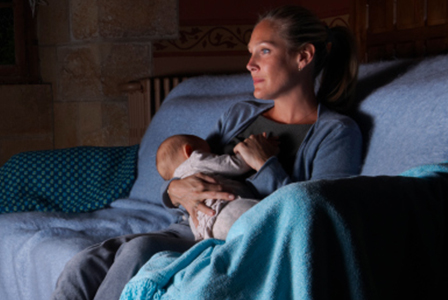 Sleep when you have a baby is a precious commodity. It can seem to become even further out of reach if you have an older baby or toddler, who seems to be capable of going eight or more hours without nursing, but who continues to wake up at night to breastfeed. This is where night weaning comes in. You’re not interested in weaning totally — just for the overnight hours.

When you’re both ready

The first thing you should keep in mind is that not every child is ready to sleep through the night in the same time frame. This means that even if your first child slept through the night at 3 months, that doesn’t necessarily mean that your next child will be ready to follow suit.

However, by the end of the first year, many (if not most) babies are ready to move past night feedings, and by that time, most moms are really ready for them to. “I’m getting to the point of being so ready, but I feel like Sage isn’t going to take it well and I’ll probably end up going back on it,” shares Tiffany, mom of one. “Sometimes it just feels like torture with the nipple pinching and teeth and fingernails. I wouldn’t mind just getting a full night of sleep again, which I know will happen on its own eventually, but he seems like he’s nursing more at night lately.”

There are a few strategies that moms employ for night weaning. One method that is often successful is putting your child on a schedule so expertly they’re not even aware they’re on one. “I set an alarm for myself to go in his room before I knew he would wake up to nurse,” Emily, mom of two, tells us. “He used to cry out every three hours like clockwork, so I would beat him to the punch of actually being in a routine of waking for it. Then each day for about a week I cut the feedings shorter and shorter. Then I would eliminate one of the feedings at a time. Eventually I stopped going in and he stopped crying for it. It was a lot easier than I thought it would be.”

Other moms use the “nursies go to sleep” method, which is where you tell your little one that your breasts have gone night-night. Books such as Nursies When the Sun Shines can really help your child make the adjustment better. However, it can still be a difficult transition, and moms we spoke with tell us that you really have to hold your ground for success.

“I night weaned Ella at 19 months,” shares Brittany, mom of one, who had several reasons for night weaning. “It was really trying. The first week she’d stand at the bed and cry. We stuck with it because of her brother due in June and she had upcoming dental work. It took about two full weeks for her to fully grasp it.”

You’ll also want to nurse your little one as much as possible during the day, particularly before bedtime, because if they’re too distracted to nurse well during the day, they may try to make up for it at night. Also, if your child gets sick or you travel, you might find yourself needing to make exceptions to the no-nursing-at-night rule. Dr. Jay Gordon has a really in-depth method for gentle night weaning that many parents have found to be extremely valuable — check it out if you’re interested.

And above all, when you set out to night wean, keep in mind that your little one might not be quite ready to give up nursing at night, or you might not be either — and that’s OK. “We tried when she was younger, around 12 to 15 months, with no luck,” remembers Kelly, mom of two. If your child doesn’t cope well, you might consider trying again in a few months. Parker from Texas had a similar experience. “The first time we tried, it failed and I gave up because she just cried and cried for hours still after trying it for over a week,” she remembers. “We tried it again probably six months later and it worked like a charm.”

Even though it may seem like your child will always wake at night to nurse, she definitely won’t. Try night weaning, and if it doesn’t work out right now, try again later.