Happy Wednesday Hump Day — also known to us as Celebrity Baby Bump Day! We have rounded up the cutest pregnant celebrities of the week, including the very pregnant Drew Barrymore, who is due to give birth any day now. Pregnant Christina Aguilera shows off her baby bump for the first time while performing in Malaysia, while Mila Kunis debuts her baby bump on the red carpet. Pregnant Kendra Wilkinson and Kristin Cavallari round out our list of the cutest pregnant celebrities of the week. 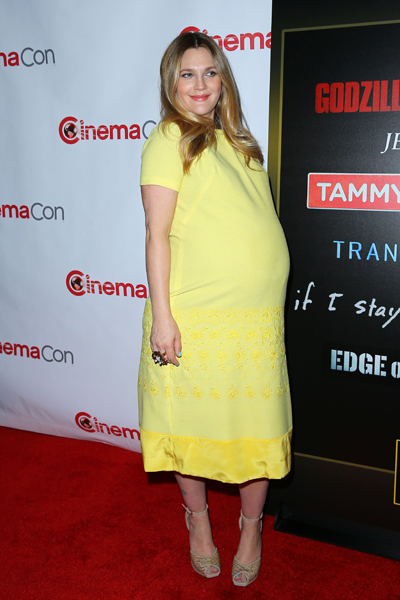 The 38-year-old actress was joined by her 50 First Dates co-star Adam Sandler, where the duo picked up an award for male and female star of the year. Sandler and Barrymore will next star in the movie Blended together.

Barrymore is pregnant with her second baby, a girl, due any day now. She and her husband, Will Kopelman, are already parents to a 17-month-old girl named Olive.

The actress also has her own line of cosmetics, called Flower, and she shared her makeup tips before the CinemaCon event on her Instagram page.

Barrymore recently told Ellen DeGeneres that she has gained more weight during this pregnancy. “I just eat everything I want, which isn’t healthy. I’m bigger this time than my first time,” she revealed. “My doctor the other day was like, ‘Yeah, so I think maybe pull back a little bit.'”

Next up: Pregnant Christina Aguilera shows off her baby bump while performing in Malaysia