Ever since her first Seventeen cover, many of us fell in love with her gorgeous smile and girl-next-door charm. Now, Niki Taylor is a mom, wife and world-famous model. And this month, she’s joining the Mommalogues! 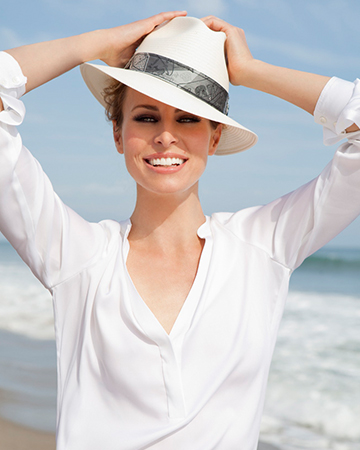 For the month of April, we’re excited to welcome model Niki Taylor to the Mommalogues. Along with our regular Mommaloguers, Taylor will be speaking out on topics like fashion, relationships and parenting. She joins other celebrity moms who have raised their voices on the Mommalogues, including Cindy Crawford, Candace Cameron Bure and Camila Alves.

She began modeling at the age of 14, and her career quickly skyrocketed. In fact, she became the first spokesmodel under the age of 18 to sign an exclusive contract with Cover Girl Cosmetics. Taylor also holds the Guinness Book of World Records record as the youngest model to sign a six-figure deal. Taylor’s first magazine cover was an issue of Seventeen in 1989. The following year, at the age of 15, she graced the cover of Vogue. She has been featured on more than 300 magazine covers worldwide, including Harper’s Bazaar, Mademoiselle, Allure, Elle and Self. Taylor was also featured in the Sports Illustrated 1997 swimsuit issue, and on the cover of their 1998 calendar.

Taylor’s branding value from Wall Street is $100 million. In a nutshell? She’s one of the most successful international models of all time.

After taking the modeling industry by storm, Taylor showed off her hosting prowess, reporting for the internationally-syndicated show, Lifestyles of the Rich and Famous. She also covered events for NBC, and was a guest host on MTV’s Fashionably Loud. In 2008, Taylor co-hosted Bravo’s Make Me a Supermodel.

Not only is Taylor stunningly beautiful, but she’s also a gracious and dedicated philanthropist. She is actively involved with numerous charitable organizations, including The American Red Cross and Victory Junction Gang Camp.

As a contestant in the 2011 season of Donald Trump’s Celebrity Apprentice, Taylor represented The American Red Cross. After the first task, she was rewarded $35,000 for her charity, but went on to become the third person to be fired by The Donald.

Visit Mommalogues to learn more about this inspirational celebrity mom. You can also keep up with Taylor on Twitter at @NikiTaylorInc.

18 hrs ago
by Jamie Davis Smith