April 2 isn’t just another day on my calendar. It’s a day that celebrates how far we’ve come in increasing autism awareness, and recognizes how far we still have to go. 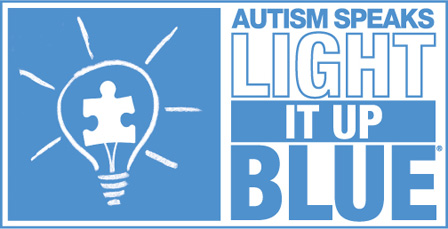 The month of April holds special significance in my life. My birthday is April 4 (4/4/66, which might explain my need for order). My daughter Eliza was conceived on April 4, 2006 (TMI?). My oldest brother’s birthday is April 11. My late grandmother passed away on April 16, and was buried on what would have been her 79th birthday, April 19. My husband Michael’s birthday is April 20. Our wedding anniversary is April 25. The icing on the proverbial cake is that April’s birthstone is diamond. Special thanks to my mom, for had she delivered just four days earlier, I would have been stuck with aquamarine. Quelle horreur!

Literally and figuratively, my April calendar was full. I didn’t need any more April events. I couldn’t handle one more April event, happy, melancholy or otherwise. But then again, there was no choice. In early 2007, our now 8-year-old son Ethan was diagnosed with PDD-NOS (Pervasive Development Disorder-Not Otherwise Specified), a diagnosis applied to children or adults who are on the autism spectrum but do not fully meet the criteria for another Autism Spectrum Disorder (ASD) such as autistic disorder (“classic” autism) or Asperger Syndrome. Ethan’s diagnosis meant that we could now add April 2 as another important and memorable date in our already-chock-full-o’-stuff fourth month. (Well played, autism. Well played.)

Autism Speaks has detractors; my family isn’t one of them. Autism Speaks for our family. Bob, Suzanne and Autism Speaks have done more to raise awareness of autism spectrum disorders… more to fund research into cause, treatment, prevention and cure (one of several hot button issues)… more to promote compassion, understanding, recognition and acceptance… more to change government policy… than any other autism organization before, during and since 2005.

As an organization, Autism Speaks cares for every child, and our child is no exception. Autism Speaks has done everything imaginable to provide priceless opportunities — musically, socially and educationally —for our son Ethan  — and families like mine. We are one community. Autism doesn’t discriminate between race, religion, ethnicity, socioeconomic status or education level; neither does Autism Speaks.

As my family prepares for its busiest April yet, it doesn’t escape me that while my birthstone might be diamond, it is Autism Speaks, WAAD, Light It Up Blue, and Autism Awareness Month that are the most priceless gems (and birthday gifts) of all.

Genuine images of motherhood
Mom faces gentic duplication in herself, kids
Moms with a cause: Advocating for military kids worldwide

Photo credit: Light It Up Blue

2 hrs ago
by Katie Cloyd

19 hrs ago
by Jamie Davis Smith