Happy Wednesday Hump Day — also known to us as Celebrity Baby Bump Day! This has been quite the week for baby announcements, as three celebrities — Mila Kunis, Stacy Keibler and Alyssa Milano — all announced pregnancies. Also on our list? Pregnant Kerry Washington is nearing the end of her pregnancy and showed off her baby bump in a beautiful blue gown, while Ciara celebrated her baby shower with BFF Kim Kardashian by her side. 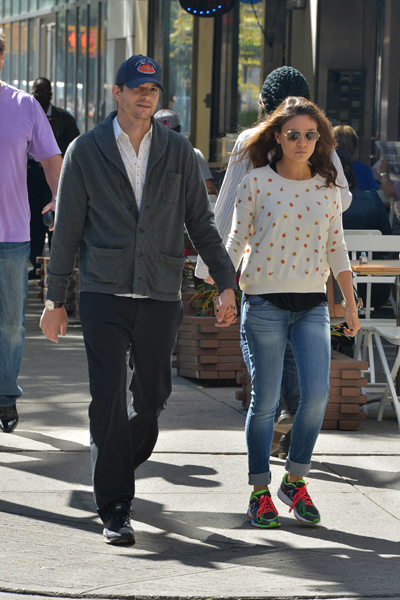 Surprise! Cute couple Mila Kunis and Ashton Kutcher are not only engaged, but they are also expecting their first child together.

“They kept it a secret as long as they could,” a source told E! News. “But obviously, she’s been starting to show so it was just a matter of time in recent days.

Kunis, 30, and Kutcher, 36, have been dating since 2012, with the Two and a Half Men star finalizing his divorce from Demi Moore in 2013, after a two year separation. This is the first child for both of them.

Don’t expect Kunis to start gushing about her pregnancy cravings or talk about baby names anytime soon, insists the source. “She is so private she probably won’t ever talk about it — at least not publicly,” the insider says. “She and Ashton don’t want to share this with the world. They’ve been like that for their entire relationship. Ashton knows what it’s like having a very public relationship and doesn’t want it again.”

The couple, who first met when they appeared on the sitcom That ‘70s Show together, were spotted together at the Lakers basketball game shortly after their pregnancy news went public — and they even appeared on the “Kiss Cam.” Kunis kept her midsection concealed in a baggy gray sweater, however the couple had fun hamming it up for the camera.

Kunis hinted in an interview with Interview in 2012 that she wanted to start a family soon. “Listen, in five years I do hope to have a family, and, you know, who knows?” she said. “I’ve always been a big proponent of not working for the sake of working, because I don’t want to work for the rest of my life — I want to live.”

Next up: Stacy Keibler has moved on from George Clooney — she’s married and pregnant