Movies featuring strong heroines like The Hunger Games‘ Katniss Everdeen or Beatrice Prior of Divergent show that girls can do anything boys can do. But what message do pink guns show our youth?

Related story STEM Toys That Your Kids Will Love 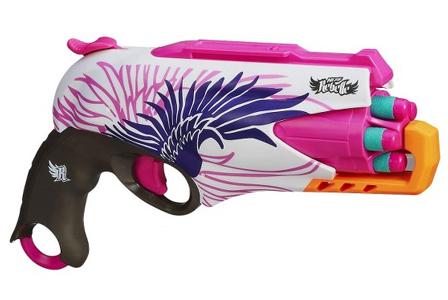 A recent story in the New York Times featured Hasbro’s latest line of Nerf products for girls, Nerf Rebelle. Reactions are mixed about the Nerf bows and guns for girls.

Parents like Christine Seto, mom of two from California, are praising toymakers for giving traditionally boys’ toys gender equality. “I think if a child wants to play with a gun or bow, they will find one. If an actual toy gun or bow isn’t available, they will make one from branches or other items available to them. Having a girl who liked these ‘boy’ type activities, finding a feminine version available is great.”

What message are these sexist kids’ toys sending? >>

Patronizing under the pretense of equality

The movement towards gender equality is nothing new, but Hasbro is contradicting that message by inferring that girls had no interest in these toys in their blue or orange counterparts. Under the premise of a gender-neutral society, the toymaker is still segregating boys from girls with pink and purple color schemes for ‘girl guns’ and boys-only photos on the boxes of the masculine toy weapons.

“The real problem is that Hasbro seems to think that girls who are interested in this sort of weapon-in-training will only cross over to the dark side if bows and sparkling trim are involved,” protests Katherine Macfarlane. “The idea that girls who are fans of Katniss are also the sort of girls who will only buy a toy with a feminized name [Rebelle] and patronizing, romanticized descriptor [Heartbreaker Exclusive] really don’t know their audience. These girls are smarter than that.”

Gender debates aside, shouldn’t parents focus on the problematic nature of faux killing machines? Whether they’re manufactured for boys or girls, these toys encourage aggression and train our kids to become mini mercenaries at the pre-pubescent stage — especially when you’re letting your 8-year-old claim a heroine like Katniss as a role model from a movie clearly inappropriate for younger kids. Despite gun violence troubling so many communities, mock violence by children is a bigger problem than many parents are willing to address.

Understand how to parent after tragedy >>

Toys like the Nerf Rebelle line aren’t promoting gender equality. They’re simply riding the stereotypes already in place to lure girls to just another line of playthings that make toy manufacturers rich. The real issue is whether parents are willing to look past concerns that play weapons are desensitizing kids to violence — an issue that deserves more attention than the color of these killing toys.

Are we desensitized to real violence?
Connecticut school shootings: How to talk to your kids about violence
Fifth grader suspended for pointing a finger gun