A report in Pediatrics, the official journal of the American Academy of Pediatrics, shows that when it comes to kids and caffeine, how much caffeine kids consume hasn’t changed much over the 10-year period studied — but the source of caffeine has. 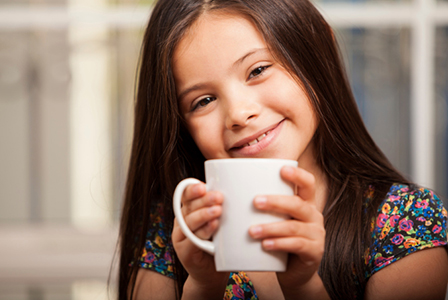 Find out everything you need to know about your kid and caffeine and how much of this jitter-inducing ingredient is OK for kids to sip.

The American Academy of Pediatrics released a report in the February 2014 issue of Pediatrics revealing that approximately 73 percent of children and adolescents guzzled caffeine on an average day. The good news is that kids are drinking less soda nowadays, declining from 62 percent to 38 percent. And, more parents are steering 2- to 11-year-olds clear of caffeine. However, to many parents’ dismay, overall the average amount of caffeine kids drank stayed steady. Not surprising is the shift in the source of the stimulant — coffee and energy drinks.

Teen death reportedly tied to energy drink, so is caffeine dangerous for kids? >>

Psychiatrist Dr. Prakash Masand, president of Global Medical Education reports that high doses — 250 milligrams of caffeine or more per day — can equal restlessness, nervousness, flushing, increased heart rate, periods of inexhaustibility, sleep disturbances, arrhythmias, and excitement in adults. But, because caffeine isn’t a nutrient necessary to keep kids healthy, the U.S. doesn’t actually have guidelines about caffeine for kids. However, if you do allow your kiddo to consume caffeine, you can sleep easy knowing that the legend that caffeine can stunt growth in kids is actually a myth, according to KidsHealth.org.

Common and hidden sources of caffeine

Most kids and adolescents probably know that soda, coffee and energy drinks contain caffeine. But some medications, candy and even food is getting a boost with the naturally-derived energy source. This rising trend of adding caffeine into consumable products has the FDA on high alert, triggering an investigation in 2013 addressing the safety concerns with caffeine consumption and access kids may have to these products.

The biggest challenge, Dr. Masand explains, is that most people, kids included, don’t know how much caffeine is too much. That’s mostly because not every soda, energy drink or cup of Joe yields the same quantity of jumpy juice. Caffeineinformer.com exposes the caffeine levels per serving in some of your kiddo’s favorite pick-me-ups.

Should kids be banned from buying energy drinks? >>

Is caffeine education the key, or should the food and beverage industries take responsibility? For now, don’t expect your children’s access to the invigorating ingredient to change. What you can do, though, is educate yourself on everything you need to know about your kid and caffeine intake, and share with your youngster about how much caffeine he or she is actually consuming — it’s a lot more practical than policing every sip.

More about kids and caffeine