When a child has ADHD, getting through the daily parenting routine can be challenging. Keeping him on task and getting him to complete chores and homework can be a battle — whether he takes medication or not. But what if there was a different approach that involved treating the mom, first? 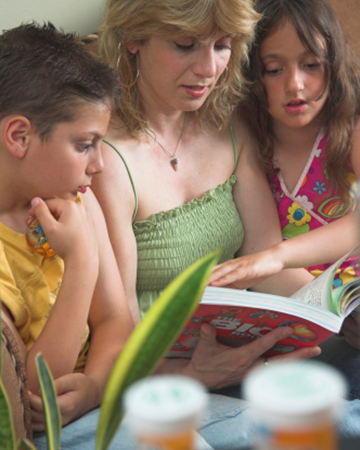 If your child struggles with ADHD, then you know the challenges that face him each day. Did you know that 20 percent of kids diagnosed with ADHD have a parent who has ADHD as well? So these challenges might not only affect your child, they might affect you as well.

Mark Stein, Ph.D., ABPP, is a research scientist at Seattle Children’s Hospital who is leading a study of children with ADHD whose mothers also have ADHD. Through the study — named “Mothers First” — Dr. Stein hopes that by treating the mothers first, they may be able to delay the onset of ADHD in their children. Many people are concerned about the rate at which medications are being prescribed for young children with ADHD — especially those under the age of 5. In this study only the mothers are being treated — using medication, behavior modification or both. Researchers then assess the effects on the mother, as well as the whole family and the child.

Many parents have gone through childhood and their young adult years only to find out as adults that they have ADHD. More difficult to diagnose in adults, ADHD can make a parent’s life difficult — and they might not even know why. Even adults who were properly diagnosed with ADHD as children may no longer take medications they were prescribed long ago.

We asked Dr. Stein how often he finds that the parent also struggles with ADHD. “We are finding that it is surprisingly common in parents of children with ADHD symptoms and often their mothers are surprised,” he shared. “It is typical for them to have problems often associated with untreated ADHD, such as depression, low self-esteem and substance use. However, oftentimes there is an early childhood history of inattention or impulsivity that was unnoticed or attributed to something other than ADHD,” he adds. “Many of these moms have had lots of psychiatric and psychological treatments, but not for ADHD.”

We wondered about the effects of stress in a family who is dealing with the daily struggles of a child with ADHD. “It is bidirectional — parenting a child with ADHD causes stress and stress interferes with parenting. I believe that treating either the child or the parent can have benefits for both,” says Dr. Stein. “We are hoping to learn whether it is better to treat the mother or child first, or both. At this point, we don’t know.”

Children with ADHD whose moms also have symptoms often live amidst frequent marital and family conflicts. Moms very often report difficulties with depression, poor self-esteem, anxiety and sadness. We asked Dr. Stein if he has observed a decrease in stress levels when the moms are treated. “Yes, in fact anxiety often decreases when they are first diagnosed, as an ADHD diagnosis can help explain many of the difficulties they are having and for the first time, they begin to see signs of hope for the future,” he shares.

Children with ADHD often need a regular routine in their lives to help them stay on task and focused. “One of the most common reasons children don’t respond to ADHD treatment is because the parents have ADHD themselves,” Stein says. “If a parent goes untreated, they are more likely to forget their child’s medications, miss appointments, lose behavioral charts or not notice positive behaviors when they occur.” What have the reactions been of the moms involved in the study? “So far, very positive although we have only recently started this study,” says Dr. Stein. “Given the shortage of health care providers familiar with treating ADHD, we find that parents are quite relieved to find someone who understands the parent and the child and how the symptoms and the treatment may be interrelated,” he adds.

Dr. Stein is hopeful as his study moves forward that maybe by treating the mothers first, children with ADHD can delay the onset of their symptoms — and possibly delay starting medications as well.

Art therapy to treat ADHD in children
ADHD: Overdiagnosed and overmedicated
The difference between bad behavior and ADHD