It happens to most of us — the minute we see a baby, our language skills fly out of the window and we’re reduced to baby talk and babbling. But that’s how you should talk to babies, right? A psychology professor from Stanford disagrees. 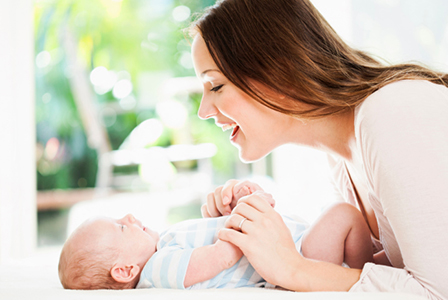 Everyone loves to talk to babies — especially when they start to respond to facial expressions and voices. But is there a best way to talk to Baby? Researchers have found that maybe baby talk isn’t best for babies after all.

Imagine being a baby, born into a world of sounds that range from the soft voice of a mother to the loud cheering of the sports fans on TV. Their brains are beginning to make sense of these sounds and patterns, which is a critical piece in their language development. This passage by Daniel Swingley of the University of Pennsylvania, in a manuscript on early vocabulary in infants for the National Institutes of Health, gives a nice summary of what’s happening with language in infants.

To make progress in learning their own language, infants must go beyond the broad melodies of speech and break down spoken language into its component parts, like the words that make up sentences and the consonants and vowels that make up words. A remarkable advance of 20th century psychology was the discovery that even before their first birthday, infants make considerable headway in one part of this analysis, the learning of their language’s speech sounds.

So babies are not only deciphering the words and phrases we use when we speak to them, but the different sounds of their native language as well. Researchers at Stanford wondered if the quality of the words spoken to babies was as important as the quantity.

What researchers looked at

Dr. Anne Fernald, a Stanford University psychology professor, was the lead author of this study, the findings of which were presented at a meeting of the American Association for the Advancement of Science in February 2014. She hoped to better understand the “word gap” that exists between lower-income children and their more affluent peers. By the time children reach school age, more affluent children have heard millions of words more than their lower-income peers, creating a wide gap in academic abilities from the very start of kindergarten.

Fernald’s study team hid sound recorders in the clothing of low-income toddlers in Spanish-speaking households to get a better understanding of the words they heard in a day. What they found was a very large difference in the number of words that were directly spoken to the child, as opposed to sounds coming from the TV or conversations between adults. One child they studied heard only 670 words spoken directly to him in a day and yet another heard more than 12,000. The study results suggest that babies’ brains respond well to rich, varied language with good grammar, which helps them decipher context even if they don’t know all the words. So rather than just saying, “Let’s eat an apple!”, you might say to the baby, “I am cutting this red apple for snack time. Let’s eat apples for a snack!”

“Young children learn language development and expand their intellectual cognition from one-on-one human engagement and affect regulation,” says Fran Walfish, Psy.D., child and family psychotherapist and author of The Self-Aware Parent. “Parents need to engage precise eye contact with their baby and use simple word phrases with a range of tonal and facial affect for the child to take in and process language. Babies are learning language long before they speak words,” she adds.

In the speech-language field, baby talk is more commonly referred to as “infant-directed speech,” meaning language that includes an exaggerated intonation; short phrases and sentences; and frequent repetition. This is seen in other cultures, as well as our own, and helps babies focus on the speaker by grabbing their attention. “Infant-directed speech is not just parents acting cute or dumbing down language, it is an effective way of communicating to infants that makes language more salient and promotes both attention and retention on the part of the child,” shares Carolyn Jaynes, MS CCC-SLP and pediatric speech-language pathologist at La Rabida Children’s Hospital in Chicago.

Set the bar a bit higher?

Gordy Rogers, MS CCC-SLP, is a speech-language pathologist in private practice in New York City. “You don’t want to ‘dumb down’ your speech for children,” he says. “You want to provide an advanced model for a child to aspire to. However, if you are dealing with a child with a documented language disorder — which I often am — it may make more sense to modify what you say to make sure the message is getting across in simple enough terms to be processable by the child. However, even as you’d do this, you would want to make sure you’re pushing the bounds of what the child can process as a model for how the child would produce language himself,” he adds.

Jaynes shares that most parents’ communication styles naturally adapt as their young children grow and change. “Parents tend to intuitively use language that is just a few steps ahead of the language their child produces,” she says. “This ensures that the child understands what they are saying, but that they are providing a model for what comes next. It is OK to use some words that your child does not know, in a supportive context, so that they are exposed to a broader variety of vocabulary,” she adds. The more you talk to them, the richer their vocabulary becomes.

One of the most important things you can do for your baby is to talk to him — and keep talking. “There is never a bad time to talk to your baby,” shares Jaynes. “All of childhood is critical to language development. Babies start learning communication skills as soon as they are born. They learn to listen to the sounds their caregivers make and they learn that the sounds they produce have the power to make their needs met and gain the attention of their caregivers,” she adds. “As children grow, their language learning focuses more on vocabulary, grammar and the nuances of using communication in interactions, but there is never a time during childhood where new language skills are not developing.”

More on babies and language

Bilingual babies are smarter than you
Fun ways to teach your child sign language
Cracking the code: The secret language of babies

6 hrs ago
by Christina Crawford