There’s nothing wrong with drinking a glass or two of wine to relax after a hard day with the kids. But are moms starting to lean too much on alcohol for stress relief? 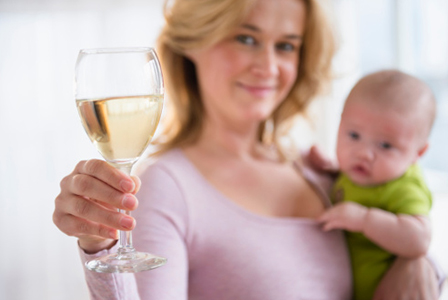 Drinking is a huge part of our culture, and an increasingly popular activity for moms. How do you know if your drinking habits are within healthy limits? We talked to journalist and researcher Gabrielle Glaser to learn more about alcohol-use disorders among moms.

Research shows increase in alcohol use by women

When Gabrielle Glaser had her first child in 1992, she recalls joining other moms at the park without even a mention of parental alcohol use. “We’d go to the zoo, the park, the pool,” she says. “I don’t remember anyone talking about chilling out with wine in the middle of the afternoon.”

According to Glaser, alcohol use was down nationwide during the 1990s, but spiked with the start of the 2000s. “In fall of 2001, I had my third daughter. When I came home from the hospital, I got a lot of wine as baby gifts,” says Glaser. “It was the beginning of a real shift that I saw around the country. Now we know that ‘book group’ is shorthand for a boozy night with the gals, book or no book.”

Indeed, Glaser notes that alcohol use by women — including moms — has increased substantially in the past 25 years. Wine is being marketed directly to women as “Mommy’s time-out” or “Mommy’s little helper.” Moreover, evidence reported by Glaser in her book Her Best-Kept Secret: Why Women Drink — And How They Can Regain Control indicates that more women are drinking now than at any time in the past 25 years, more women are being arrested for drunk driving and more women in their 40s and 50s are checking into rehab.

Why are moms drinking so much?

Glaser credits the stress faced by modern women as the source of the rise in drinking in recent decades. “We expect ourselves to have great careers, terrific kids, a perfect house, a perfect body with a toned core after having babies and a hot relationship with a ton of sex but never any issues,” says Glaser. “Sometimes, that taking-the-edge-off drink can turn into two or three, but because the causes of the stress aren’t disappearing, the need for the drink doesn’t, either.”

Do you show signs of alcohol abuse?

Frequent drinking is often concealed by either shame and hiding or, on the flip side, an eager and over-the-top acceptance of unhealthy drinking habits. It’s never easy to take a critical look at your own habits to determine whether or not your relationship with booze is unhealthy. Keep in mind that moderate alcohol use isn’t necessarily a problem.

How can you know if your drinking habits are problematic? Glaser suggested asking yourself the following questions.

Alcoholism and alcohol abuse can’t be identified by simple questions alone, but answering yes to any of the above suggests that you may need to talk to your doctor. Alcohol use disorders can severely impact mental and physical health and the overall health and well-being of families. Fight the stigma around alcohol abuse and dependency, and get the help you need.