Forget texting and tweeting, Backchat is a relatively new messaging app that takes chatting to a whole new level — it’s totally anonymous. What do parents think about this and is it really a good idea for your teen? 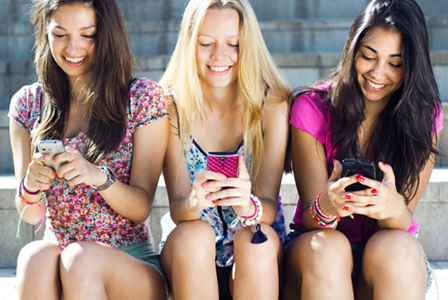 Remember when Facebook first became the thing with teens and parents were all concerned about who could “friend” their kids and whether they would ever be considered safe online again? Enter the new generation of social media apps, where your teen won’t even know who’s she’s chatting with.

Why the move to anonymous social media? Research by the Pew Research Center suggests that 36 percent of Facebook users don’t like the oversharing of information from people they follow, like updating their status too frequently with boring information. Does this oversharing take some of the fun out of social media, at least for teens?

“Over the last decade, we began to text and share every thought, opinion and idea with limited engagement or thought through our phones. Backchat was built to create experiences and moments in time that you will share with friends, new and old, via anonymous messaging,” shares the message in the video promoting Backchat, as spoken by the founder himself, 14-year-old Daniel Singer. He developed his very first app at the age of 12, then went on to develop Backchat with the help of his father. Information on the website for Backchat promises that anonymity adds a new level of excitement to conversations, which in turn helps you get closer to your friends. Whether enjoying quirky conversations or even playing a prank, Backchat is banking on the fact that tweens and teens are eager for that next level of messaging — being anonymous.

Want to see some clues?

Other social media sites to watch

Whisper allows users to share anonymous secrets and express themselves with anonymous posts featuring an image and the “secret” confession. Users can like a secret with a heart or leave a comment.

Secret is an app where people can share anything they’re thinking and feeling without judgment. By eliminating profile photos and names, the emphasis is on the words and images.

Snapchat is a photo and video sharing app. Users decide how long their posts will stay live, from 1 to 10 seconds after posting, or 24-hours for Snapchat Stories. The riskiest part of Snapchat is that even though images don’t last forever on the app, users can still take a screen shot of anything — and it exists for eternity.

Kik is a smartphone messenger — originally developed in 2009 by University of Waterloo students — that boasts a built-in browser and 100 million users.

Ask.fm lets users ask each other questions, often anonymously. Linked in the press to several suicides, the site has recently taken measures for policing their content online and are urging members to use the report, block and delete options available to them.

Backchat users connect with their friends through Facebook or Google+ without the other party knowing their identity. Singer shared about the app: “It allows your recipient to judge what you’re saying before they judge who said it.” If the anonymous messaging isn’t enough, there are different levels of clues you can use to get to know your friends better — maybe even help you guess who they are. Need more clues? You can make in-app purchases of additional clues, if you choose. This builds in a gaming aspect to the app that many teens crave.

No worry about bullies?

Unlike other social media apps, Backchat is a one-on-one messaging app — which may make it potentially a non-issue in terms of cyberbullying. Since messages are only sent to one individual person, there isn’t the crowd mentality that often comes with Facebook comments or other possibly avenues for bullying. But it remains a possibility that an individual wanting to bully another could remain anonymous and continue to torment someone with messages and questions, assuming that their identity wasn’t revealed.

What parents are saying

What do parents think about the anonymous messaging apps? Mary has a teenage daughter and is familiar with many of the social media sites teens are using. “I have a 16-year-old daughter who uses Instagram and Snapchat,” she shares. “We’ve always had a pretty open relationship, so I don’t closely monitor whom she follows. If she is aware of Backchat (I wasn’t until just now), she hasn’t mentioned it. I would not forbid her to use it, but I certainly wouldn’t encourage it,” she adds.

Another mom has a different take on this new spin on social media. “If Backchat can only access friends from Google+ and Facebook, then the place we need to monitor controls is on those two sites,” shares Cathy, mother of three teenagers. “If your child is only friending and following people that she knows, then these anonymous messages are obviously coming from someone they know. I can see where that might be fun, if you could get the clues and try to guess who sent them,” she adds.

Worried about your child’s privacy and interactions online? Speak to them frequently about privacy controls and monitor their social media usage, so you know which sites they have accounts on. If you suspect that your child is being cyberbullied, take steps to end it before it gets too out of hand.

More on teens and online safety

Teens and the consequences of social media
How to install parental controls on your teen’s computer
Instagram and your teen: What you should know