Guns in the school are a no-no — but what about finger guns? A 10-year-old boy was suspended for brandishing such a weapon because of a strict school policy. 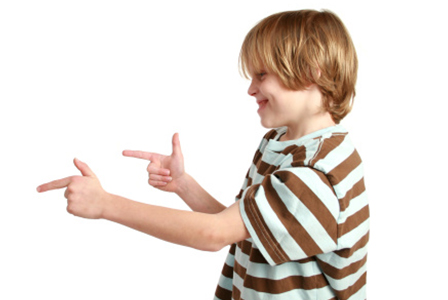 An Ohio boy is learning a hard lesson after he was suspended from school for three days for brandishing a simulated weapon. A toy gun? No. A finger gun. Yes, a finger gun comprised of a thumb and a finger, pointed at a classmate’s head, with the accompaniment of the word “Boom!”

The school has a strict zero-tolerance policy against weapons of any kind, and this includes simulated weapons as well. His dad is wondering why the actions merit a three-day suspension, and we have to ask if this is way over the top as far as kids and imaginary play go.

Children at an elementary school in the Columbus, Ohio, area have been warned repeatedly about fashioning pretend guns out of paper and pretending to shoot their classmates with finger guns, and a final notice was given to the students by their principal to stop these activities or face the consequences. Nathan Entingh just happened to be the first child caught breaking this rule, and was issued a three-day suspension and warned that another incident could result in a longer suspension — or even expulsion.

His father — and many others — feel that his punishment is excessive. Why does a finger gun garner as much (or even more) punishment than an actual violent act, such as fighting or bullying? Are we as a nation so hypersensitive to guns in the schools, period, that kids can no longer be kids, while real guns are allowed to be concealed and carried in other places? Or is this a good policy to have?

Many feel that the punishment, while excessive, shouldn’t be unexpected as the entire school had been warned repeatedly that this type of play was no longer tolerated. Lindsay from Texas feels that the punishment is definitely excessive, but the story isn’t as simple as being suspended for a finger gun. “This seems to be a case where it was excessive and becoming more of a distraction than anything,” she shares.

Heather, mom of two, feels the same. “I agree with the school,” she says. “There is nothing wrong with asking children to refrain from violent play, even if it’s just a finger gun, and with the amount of warning this child received he shouldn’t be surprised that he was suspended.”

Way over the top

However, others think that this is an example of administrators going way overboard when it comes to protecting our children. “I get that gun violence is a major concern for not only schools, but public places everywhere,” explains Jenny, mom of two. “However, if my child was suspended for pointing a finger at a child and saying ‘Boom!’ I’d probably sue the heck out of them. I’m worried that kids won’t be allowed to be kids anymore.”

The policy isn’t going to change at this particular school, and if your child is in school, you might want to check with their policies regarding lookalike firearms. Sit down with your kiddo and explain what is right and what might get them in trouble before it even becomes an issue.

Kids and gun safety
Kids left alone at home shoot a gun
Packing heat on the playground: Teachers with guns

16 hrs ago
by Cristina Velocci