Happy Wednesday Hump Day — also known to us as Celebrity Baby Bump Day! We have rounded up the cutest pregnant celebrities of the week including Scarlett Johansson, who surprised us all with her announcement that she is five months pregnant! Check out her baby bump here, along with gorgeous pregnant celebrities at the Oscars, including Kerry Washington and Olivia Wilde. Pregnant Kristin Cavallari showed off her baby bump at the Oscars after party, while pregnant Jenna Fischer debuts her baby bump for the first time. 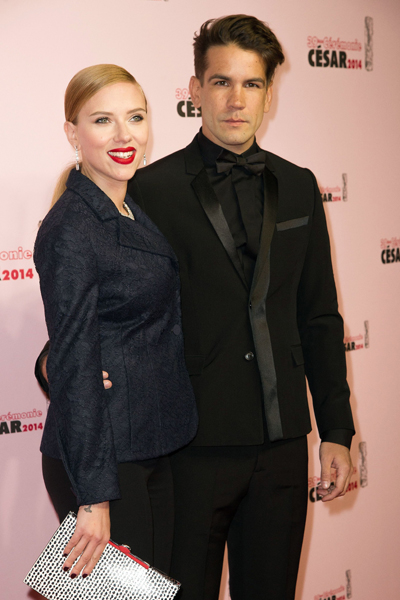 Surprise! Scarlett Johansson is pregnant with her first child with her fiancé, French journalist Romain Dauriac — and she is already around five months pregnant!

The 29-year-old actress made an appearance last Friday with Dauriac at the 39th Cesar Awards in Paris wearing black pants and a blue blazer to try to disguise her midsection, however we think we spot a little baby bump.

Johansson, who was previously married to Ryan Reynolds for three years, said recently that she is in no hurry to get married.

“I’m not doing any wedding planning,” she told Good Morning America in January.

So was this baby a surprise? Possibly — however she just told the Daily Mail that she thinks you should plan out the right time.

“I would like to have my own family, that would be nice,” she said. “They say it’s never the right time and I am sure that’s true, but I think you have to plan it like anything else. At some point it is something I look forward to. I am fortunate in that I have had a long career — 20 years — that has been very diverse. So, you know, picking a time to plan a family feels like something that I could do and not feel as though I was missing out.”

Next up: Pregnant Kerry Washington chows down on pizza in her Oscar gown