Happy Wednesday Hump Day, also known to us as Celebrity Baby Bump Day! We have rounded up the cutest pregnant celebrities of the week, including the newby on our list — Christina Aguilera! Scandal star Kerry Washington is growing and glowing, as is Olivia Wilde — who only has 9 weeks to go! JWoww showed off her baby bump at her 28th birthday party, while pregnant Kristin Cavallari rounds out our list of the cutest knocked-up celebs of the week. 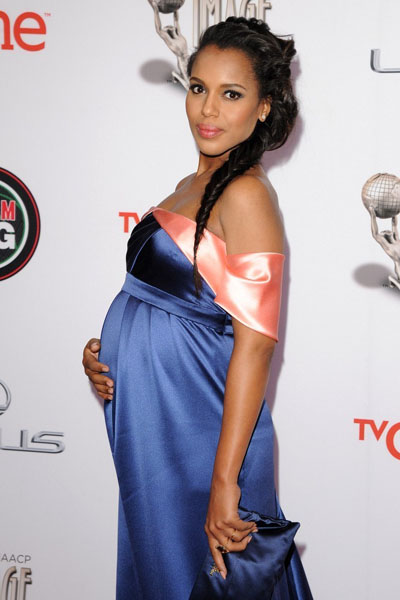 Simply stunning! Pregnant Kerry Washington looked gorgeous in a blue and peach Thakoon dress at the 45th Annual NAACP Awards on Feb. 22. The Scandal star kept her accessories chic and minimal, with small diamond earrings and a Suzanne Kalan champagne diamond vitrine starburst ring. She wore her hair in a cascading fishtail braid.

The actress was recently thrown a baby shower by Scandal writer Shonda Rhimes, who hosted the bash at her home in Hancock Park. Washington wore a blue dress and celebrated with 50 guests including Jane Fonda and Scandal’s Darby Stanchfield. There were no hints as to the gender of the baby, as gifts were wrapped in all shades of colors, including blue, green, yellow and pink.

Washington “looked beautiful and had very little makeup on,” a source told E! Online. “She was with her mom Valerie and was met by several family members inside. Kerry looked ecstatic to be surrounded by so many family members and friends. She loved mixing her work friends with her family and having everyone get to know each other. Shonda was very gracious to host everyone and Kerry was very appreciative.”

The 37-year-old actress is expecting her first child with her husband, former NFL star Nnamdi Asomugha.

Next up: Christina Aguilera is pregnant! Can you spot her baby bump?