A Delta Airlines employee informed a customer, via Twitter, that she could not breastfeed on a flight without a cover. Reaction was swift — and, for Delta, painful — but shows that breastfeeding advocacy continues to be relevant in today’s world. 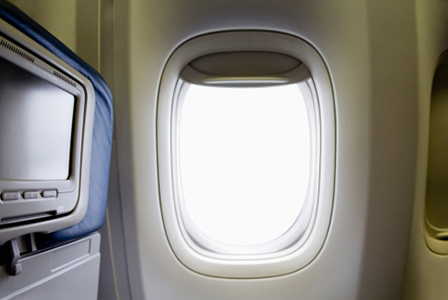 Delta Airlines felt some swift social media sting when an employee advised that a woman could not breastfeed on a flight unless she was covered up. An apology has been issued, but it’s too little, too late. The resulting outcry has fully illustrated why breastfeeding education, advocacy and support continue to be essential — not only for moms and babies, but for those who work, live and interact with them. 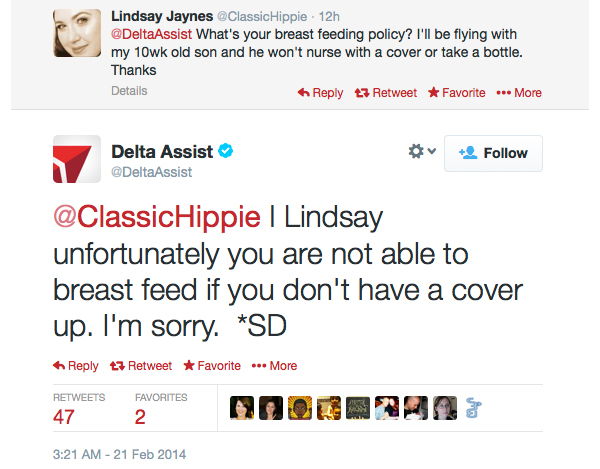 A Delta Airlines customer tweeted their customer assistance Twitter account to ask the following question. “@DeltaAssist What’s your breast feeding policy? I’ll be flying with my 10wk old son and he won’t nurse with a cover or take a bottle. Thanks.”

A customer service representative was quick to reply, but her answer was definitely not what the new mom was expecting. “@ClassicHippie I Lindsay unfortunately you are not able to breast feed if you don’t have a cover up. I’m sorry. *SD”

This new mother was understandably upset, and replied that the baby couldn’t nurse under a cover, after which the rep suggested pumping. The problem? Her baby doesn’t take a bottle, which isn’t uncommon for exclusively breastfed babies. So Lindsay was wondering how she’d be able to go on a six-hour flight with her infant who needed to nurse every couple of hours.

A mom, feeding her child

The “policy” that SD cited is wrong. Mothers are, in general, allowed to breastfeed their babies wherever they have a legal right to be — airlines included. SD’s advice was simply incorrect and has caused a social media firestorm that Delta is just now attempting to put out. However, this brings to the forefront that an official apology needs to be issued, their employees need to be trained and the relationship of the nursing mother with the public needs to be examined more thoroughly.

Jessica, who runs the popular blog The Leaky Boob, noticed the interaction and brought it quickly to the attention of her social media channels. She says, “While Delta doesn’t have an official policy on breastfeeding, this incident of a mother seeking to be prepared for traveling with her infant reflects a much deeper issue — breastfeeding mothers are all too aware that they may be publicly shamed. The airline’s unfortunate response indicates a need for an official policy and training, as well as observance of laws protecting breastfeeding mothers and their child’s right to eat.”

Jamie, the mastermind behind TheBabyGuyNYC, also brought it to his audience’s attention for similar reasons — he knew that the situation was wrong and that people need to be aware that this is the sort of hurdles moms face, even with all of the advocacy that goes on today. “I think the bigger problem in this social media fiasco is that this poor lady was so unsure of her rights as a breastfeeding mom that she had to ask,” he explains. “That really showcases the larger problem of breastfeeding education and support in this country. A woman should never feel like she cannot feed her child. Ever.”

Delta is currently trying to backpedal its way out of this public relations nightmare, but moms observe, listen and remember when one of their own is discriminated against. “This is a bunch of BS!” exclaims Ashley, mother of four. “They can’t tell you that you have to use a cover to breastfeed on a flight! I nursed Ethan on a couple different flight carriers when he was about 8 months old. No cover because he hated them. No one said a word to me about nursing, but complimented about how he was such a good baby.”

Liz had similar experiences. “I nursed Evelyn on Northwest flights at 3 months, 6 months, 9 months and 15 months,” she shares. “Never had a problem or complaint. Would they rather listen to a crying baby, because who other than the person sitting directly next to a nursing mother is even going to know that she’s nursing?”

It will be interesting to see how this plays out, but hopefully it will be for the better, with more awareness for not only this particular Delta employee, but businesses all over the nation. Train your staff better and establish an official breastfeeding policy — something along the lines of, “Let mothers feed their babies.” And moms, take heart that you can breastfeed your baby. In public. On a plane. In a restaurant. At a water park. In church. At the store. In a courthouse. It’s your child, and you can feed her.

What are breastfeeding nurse-ins all about?
Kicked off a plane for breastfeeding
Mom not allowed to breastfeed at Victoria’s Secret

8 hrs ago
by Racheal Pulver