Closing the baby-making doors is a hard decision to make, and for some families, vasectomies are the favored option. What is the real deal with this form of permanent birth control, and why do some dads make this choice? 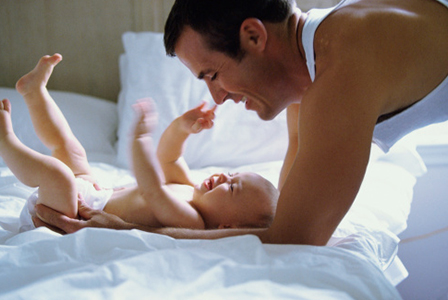 Permanent birth control is a step that many families take when they’ve decided that their family is complete. But who goes under the knife — Mom or Dad? These families share why a vasectomy was the answer for them, and what the experience was really like.

What is a vasectomy?

First, let’s explore the aspects of a vasectomy from a medical standpoint. Christopher Saigal M.D., MPH, professor and vice chair of UCLA Department of Urology, was able to explain a little more about what is considered a relatively simple, outpatient procedure that shouldn’t take more than 20 to 30 minutes. A local anesthetic is used and it is often done right in the doctor’s office. “During the procedure, a small incision is made in the scrotum to access the vas deferens, the tubes leading from testes,” he tells us. “Both the left and right vas deferens are cut and then sealed by cauterization, so the sperm are unable to travel from the testes to the penis. The incisions are then sutured closed. Men still are able to produce semen, but without the presence of sperm.”

Dr. Saigal says that men can expect a few days of swelling and tenderness in the area, but can usually resume full activities within a week or so. It’s considered to be a better option by many when compared to female sterilization, which is more invasive and has a longer recovery time. He also warns that while reversal is possible, men should consider a vasectomy to be a permanent procedure as reversals are usually not covered by insurance and are, at best, only around 50 percent effective. There are rare cases where the vas deferens can grow back together, rendering a man fertile again, so semen analysis a couple of months later for the “all clear” is universally recommended.

When it comes to real families, the stories are fairly similar. For example, many moms we spoke with were glad to hand the reins of reproduction (or lack thereof) over to their partners once their own work was done. “We did it for medical reasons,” Nicole, mom of two, tells us. “I was basically told that with having lupus, another pregnancy wasn’t advisable since I had issues with my pregnancy with Graysen. It was either him get a vasectomy or me get my tubes tied. I told him I had done all of the work by having the kids that it was his turn to feel some pain.”

Bethany recently had her second baby and she and her husband are eyeing this solution for the same reasons. “We haven’t gone through with it yet, but this is the route we will most likely be taking,” she says. “I’m 37 years old. I’ve had 18 months of pregnancy, three months of persistent nausea, 24 hours of unmedicated labor, stitches, hemorrhoids, bleeding and cracked nipples, and countless hours of lost sleep. Through all of this I have had two beautiful babies and I wouldn’t trade it for the world, but I’ve been through enough. Our family is complete and I feel like he can go through a few days of discomfort to prevent further pregnancies.”

Other moms were happy to have the freedom permanent sterilization brings, and some find an unexpected boon in the bedroom. “We just knew that three was going to be a handful and after having a girl after two boys, that was it,” explains Alisha. “The procedure went really smoothly and he had no complications. I babied him for three days and he went back to work after a long weekend. I am proud of him for doing it for us… and sex couldn’t be better these days without the worry of possibly getting pregnant!”

Jo and her husband had a very similar experience. “My husband had his done when our second baby was 3 or so months old,” she shares. “I have had issues in the past with hormonal birth control and refused to go back on it. We were in our late twenties with two kids under 2… I remember him asking me if I wanted to try for number three. And how I totally broke down. I was terrified to even have sex for fear of being pregnant again. He had no complications and we love the fact that we can have sex whenever and not have to worry about baby making.”

Making this decision shouldn’t come lightly, but as the procedure is low risk and easy to heal from, it’s become the method of choice for many families who are ready to see their baby-making years in the rear view mirror.

Should you have a baby shower for a second pregnancy?
Having a baby when you don’t have a mom
We disagreed on the size of our family — and our marriage ended