Corporal punishment is extremely controversial, but one Kansas lawmaker aims to make spanking that is hard enough to leave bruises legal — what some would call child abuse. Has she gone too far? 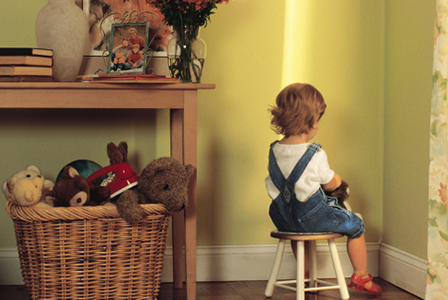 In a move aimed to increase parental authority, Kansas has introduced a bill that would give parents — and anyone they give permission to, such as babysitters or teachers — the legal right to spank their children hard enough to leave bruises and red marks. While it also outlines physical punishment that would be against the law, reactions are massively divided amongst parents.

Corporal punishment in the public school setting has been banned in 31 states (and interestingly enough, many European countries have banned it at home as well as at school), but Kansas is not one of them. Fresh on the heels of a highly controversial proposed law that would allow legal discrimination based on religious views (that is now floundering with no hope to see the light of day), Kansas is again in the spotlight with another questionable proposed law.

Current laws in Kansas allow spanking that doesn’t leave marks or bruises, but a bill authored by Kansas House member Gail Finney, D-Wichita will lighten those laws — and will also move to define non-legal physical punishment as well. While spanking that does leave red marks and bruises will be allowed, other forms of physical punishment will not be, such as hitting a child with fists or hitting a child in the head or body. Using a belt or a switch would also be deemed illegal and could result in abuse or battery charges — so in a way, it does give kids a measure of protection. But is it completely off the mark?

Backers of the bill say that this will help increase parental authority, as well as the authority of those who are also charged with caring for or looking after your child. Parents in favor of the bill cite the days when they were children and were strapped or spanked, whether it be by a teacher or a parent, and how that experience straightened them out. “Most of the people saying no to spanking their children are going to wind up with bratty, no manner having, disrespectful kids who will become part of the ongoing problem of our youth today,” writes a user on KCTV5’s Facebook page. “Don’t abuse them, but a good whack will sure straighten your mouth and attitude up real quick.”

Others question the need to expand a bill that already allows spanking. “I do not agree that allowing parents to spank harder is going to teach children respect for authority,” says Jenn, mom of one. “There are many ways to teach a child respect, and making children fear their parents or trusted caregivers is not the way to do it. If you can’t beat an adult to the point of bruising, then you shouldn’t be able to do the same to a child.”

There seems to be a large gap between the two schools of thought, with some tending to have a “kids these days” mentality and others who often choose to discipline in a gentler manner who feel this move is akin to legalizing child abuse. Age and generation often have a lot to do with it, but the divide is definitely deep and wide, and Kansas again waits in the public eye as the debate rages on.

Positive discipline: Why time-outs don’t work
Should a parent discipline other people’s children?
Mom vs. Dad: The discipline debate