Happy Wednesday Hump Day — also known to us as Celebrity Baby Bump Day! We have rounded up the cutest pregnant celebrities of the week, including rapper Lil’ Kim, who shocked everyone with her surprise baby bump. Pregnant Kristin Cavallari posted a selfie of her big and beautiful bump, while pregnant Kendra Wilkinson looked adorable on the red carpet. Pregnant Kelly Clarkson and Gwen Stefani round out our list of cute pregnant celebs. 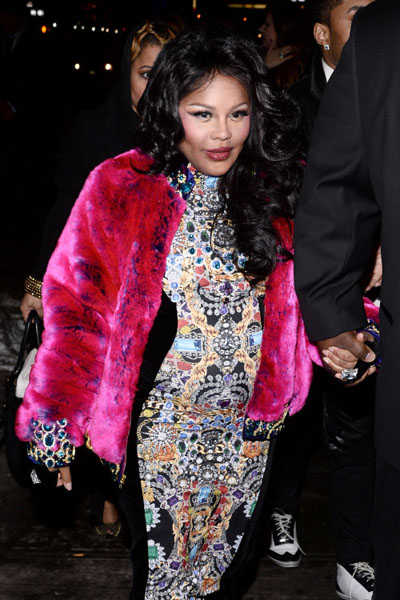 Surprise! Rapper Lil’ Kim surprised everyone when she showed up at The Blonds’ fashion show during Fashion Week in New York wearing a colorful bedazzled gown that showed off her large baby bump.

The pint-sized rapper, who is reportedly 4-1/2 months pregnant, is keeping the name of the father a secret (she will reportedly reveal it in on a reality show she is filming) however the internet has been abuzz over two possibilities. She was dating boxer Floyd Mayweather up until last September, so many believe he is the proud papa, however hip-hop artist Mr. Papers has said he is actually the father. He has retweeted congratulatory messages — and even changed his Twitter name to “Daddy.”

Mr. Papers told the New York Daily News, “I’m very upset people are going around saying this is Floyd Mayweather’s child when it’s mine. I’m excited to be a dad and am going to marry Lil’ Kim.”

Lil’ Kim has yet to comment on the daddy controversy, however she did take the stage at New York Fashion Week. “I’m a mom, but I can turn it up a little!” she told the crowd. “I’m still going to work. I’m still going to be hardcore. The baby has made me even more of a beast!”

Next up: Pregnant Kristin Cavallari is growing and glowing