It seems to be a commonly held belief that the prevalence of fast food in our society is the main cause of childhood obesity. A new study seems to suggest otherwise. 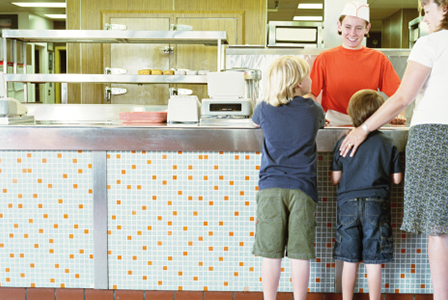 Fast food equals fat food, right? It’s been an easy target for blame when childhood obesity rates are climbing and so many families eat fast food more than just occasionally. Researchers at the University of North Carolina wondered if there was actually something else going on that’s the major factor contributing to childhood obesity — and what they discovered was a more deeply rooted family issue.

Barry Popkin, Ph.D., is a professor of nutrition at The University of North Carolina’s Gillings School of Global Public Health. He wanted to explore the idea that fast food was the main contributor to high rates of childhood obesity. He and his research team dug deeper into the issue and compared statistical data in an effort to evaluate possible relationships between the consumption of fast food, overall eating patterns within families and the risk of obesity in U.S. children. The January 2014 issue of The American Journal of Clinical Nutrition included their research findings.

Popkin’s team of researchers used data collected on 4,466 children between the ages of 2 and 18 years old. This information was collected between 2007 and 2010 as part of the National Health and Nutrition Examination Survey (NHANES). To help determine which factors were most related to diet, eating patterns and the prevalence of obesity, the researchers categorized the children into three groups:

As the researchers hypothesized, the children who ate fast food the most also had poor nutritional habits when they ate other foods. This group of children consumed fewer fruits and vegetables, less dairy and more sugar-sweetened beverages (referred to as a ‘Western” diet) than did the group that didn’t consume fast food at all. Yes, this was also the group most likely to be overweight or obese, but after researchers adjusted statistics for the rest of the diet of children in this group, fast food intake became insignificant. It turned out that overall dietary patterns — not just fast food intake — were the main contributing factors in childhood obesity.

Worried about your children’s diet? Examples set at home are more likely to click and stay with your children, even when they start eating more meals away from home. See if you can find lower-fat or lower-calorie versions of your favorite recipes, or try to make substitutions for higher-fat ingredients.

While it may be hard, set a good example yourself by including dairy, fruits and vegetables in your daily diet, limiting your consumption of sugary drinks and choosing healthy snacks such as nuts or fruit. Eating fast food once in a while — as part of a well-balanced diet overall — is not going to cause your child to be obese.

5 Reasons your child is hungry all the time
Calming foods for hyperactive kids
Healthy kids: The importance of child nutrition and exercise

19 hrs ago
by Ambrosia Brody