You can’t believe your little angel not only dropped the f-bomb (or another just-as-unsightly curse word), but she used it correctly. You blame your husband, he blames you — but, finger pointing aside, how should you react when this happens? 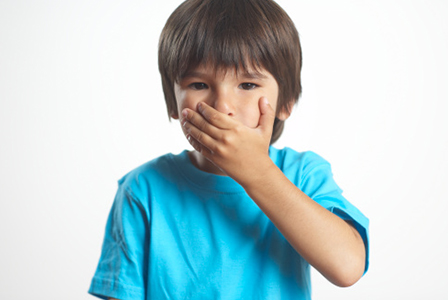 Oh cr@p! Sooner or later, it will probably happen. Your child will curse — and, as luck would have, it will usually happen around a group of people, as it did to Jen Hancock, author of The Bully Vaccine.

“My son was into Beverly Hills Chihuahua and he was playing with friends and called one of the girls a b*tch. He was playing dog. It’s the correct term for a female dog. He just had no idea it wasn’t OK to call a human girl a dog girl even during pretend play and when he was told he stopped,” says Hancock. “Fortunately, my mom friends thought it was funny and weren’t offended either. I’m just glad I haven’t had to explain the f-word to him yet!”

Lorraine Hamby recalls the time her daughter, who was 6 at the time, said a curse word while flipping through a book catalog. “She’s trying to figure out which ones she could afford with the money from her piggy bank. She sees one she likes. It’s too expensive. And she says, ‘Damn it!’ She looked up at me and burst into tears,” recalls Hamby.

So, your child drops the f-bomb, you stifle a giggle — and then what? Most parenting experts agree you shouldn’t overreact the first time it happens (or wash their mouth out with soap).

First of all, listen to your child. “Don’t judge or jump to conclusions,” he shares. Next, he says to empathise or think about what your child may have been feeling — if she was angry or upset and perhaps she heard that word from you.

Lastly is speak, he says, giving an example of a conversation you may have.

“Hey Grace, I just heard you say a word. I’m not quite sure, if I heard right. Did you say fu*@?” Wait for your child’s response. “OK, I just wanted to check. Well, I really don’t like that word. I feel sad when I hear that word and I know it can hurt people. And I don’t want people to get hurt. Not you or me or anyone else. Please tell me too, when I use a word you don’t like, OK? Would you like a hug, before you go outside again? “

What if they continue to cuss?

What if you have a conversation about appropriate language and your child cusses — again?  “Try not to laugh,” says parenting expert and co-founder of Kinsights.com Jennifer Chung. “If your toddler curses, don’t laugh, even though hearing such words from your wee tot may sound comical or shocking. Don’t repeat the story to other adults in front of the toddler, as this will teach your child to repeat the word or phrase to get a laugh,” she suggests.

For older kids, you can always use the tried-and-true method of the swear jar (put a certain amount of money in a jar if you swear) or you can create a list of chores that must be completed for each swear word used, says Chung.

Doctor of psychology Dr. Nancy B. Irwin says you should also look at the context of their swearing. “It depends on the situation and the energy behind their swearing,” says Irwin. “If they do so with anger, or name-calling/labeling/racial slurs it is a problem. It indicates something is going on and the child needs to be heard in a safe (probably therapeutic) environment.

“If you use these words yourself, yet tell your kids never to do so, you are sending them confusing messages. Walk your talk,” she says. “If they do so because it is “cool” and common in their social circles (and depending upon their age of course) you may want to let them know what the boundaries are — no swearing at home, around grandma, at church, in school, etc.”

What about older kids and teens?

Wanda Anglin, owner of SEO Buzz Internet Marketing says, speaking from experience with her own teens, many are repeat offenders with using curse words. “I have even gone so far as to tell my kid that if they want to lose opportunities by having others form opinions of them, that is their choice,” she says. “Their friends’ parents may not let them hang together, they may lose a job opportunity, etc. But in my presence, it is not allowed because I expect to be shown respect by choosing non-shocking language.

“I find that this acknowledges that they are their own person and have choices, reinforces that using shocking language has its price and sets boundaries for what I want to hear,” says Anglin.

Other families may decide that, once their child reaches a certain age, the occasional curse word is not that big of a deal.

“If you and your mate use colorful language in a fun, expressive way (again, not out of anger), then you may choose to allow your kids to do so in the safety of home,” says Irwin. “Of course if your kids are very young, you may not want to model inappropriate language until they are old enough to know the meaning of the words and to discriminately use them. That usually occurs around puberty.”

How did you react when your child cursed?

Yep, I let my kids curse!
Are you pushing your kids too hard — or not hard enough?
Is the tooth fairy actually good for kids?

3 hrs ago
by Tabitha St. Bernard-Jacobs

4 hrs ago
by Leslie Priscilla

4 hrs ago
by Candice King