Sometimes I wish I could be down with Barbies and mini pink computers and whatever else is being marketed to our kids these days. It would certainly make parental life easier. I’m really picky when it comes to toys for my child, and I’m not alone. 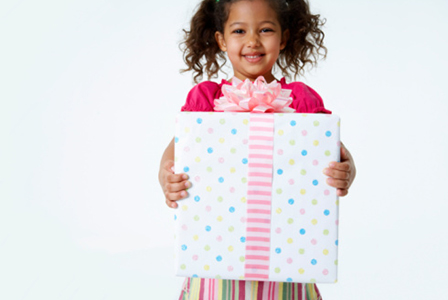 I mean, I have a 4-year-old daughter who is impressionable. Everywhere we turn, there’s some image of a made-up princess prostitute nightmare for preschoolers. I mean, are toy-makers trying to screw us all over? Because it sure seems like it.

But don’t fret because there are actually some original and creative toy choices out there for kids. I asked around and came up with a bunch of gifts that are totally PPA (picky-parent approved).

(The list of gifts we hate is way longer.)

Things that go
(and stay) outside

Many parents said they preferred toys that go outside versus inside. That way, even in the cold months, they remain outside or in the garage and never make their way into the house — woohoo! Playhouses were a favorite among PPs. They can range in price, especially if you’re looking for a wooden model, and though we like to represent the smaller shops, the Neat and Tidy Cottage (Sam’s Club, $136) is by far the most bang for your buck. For the summer months, a good old plastic pool is always a winner, as are simple gardening tools (For Small Hands, $17) for those little diggers.

There are so many cool crafts out there for kids. What parents say they enjoy most about their kids crafting is that they’re learning hand-eye coordination while also creating something they can wear or use. Kids these days are crazy for all things Rainbow Loom ($15), but there are tons of other simple ideas, like teaching kids to knit, for example. All you

need is a couple of kid-sized knitting needles and some yarn and before you know it, you’ve got yourself a whole new wardrobe!

Hanging out in their own private play areas is something kids really love to do. I like the idea of kids having their own easily assembled tents or canopies like these (Bella Luna Toys, $130 and up) or this one (Land of the Nod, $99) because it means your couch cushions will actually stay on the couch instead of on the floor in the shape of a fort. Also, it’ll give you a little privacy of your own. Score!

This is a great idea for storing dress-ups. Last Christmas, my daughter received one in the shape of an old suitcase that was purchased for a few dollars at a thrift store then fancied up with the words “Who am I going to be today?” written on it in glitter. Dress-ups are easy to come by and lead to all kinds of imaginative play. I have old shirts my daughter wears as dresses and thinks they are the greatest thing in the world. I mean, give them a couple pipe cleaners and all of the sudden, they’re a butterfly for the afternoon. Flitter, flitter. There’s really no need to run to Party City. Your local Salvation Army surely has plenty of fancy finds for your dress up box! Maybe just give it a quick wash before you slap a bow on it.

Not just for girls, duh. Boys and girls alike love to make little kitchen creations and have tea parties. We made our own kitchen pretty easily out of an old hutch, but there are tons of play kitchens on the market that won’t break the bank. This play kitchen (Ikea, $80) is a popular wooden model and there are endless items to chose from to accompany it.

Something they
actually need

No surprise here, the number one thing picky parents said they wished their kids got more of was stuff they actually needed! Don’t be shy about asking parents what their kids could use even if you think it’s a boring gift. I’m speaking personally, but my kid never minds getting practical stuff. She loves a new sweater or pair of rain boots, as long as they have polka dots or are (ugh) pink.