If you’re like a lot of parents, you started a Facebook account to see what your kids were up to and to make sure this “Facebook thing” was safe. Years later, you may have developed habits that are about to get you blocked by your kids. 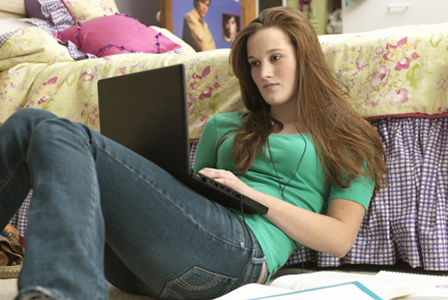 Hashtags, as all the “cool” parents know, are the symbols used to connect on Twitter (and now on Facebook). For example if you went out to dinner you may say something like, “Had so much fun with the kids at Red Lobster. #passthebutter” The occasional use of hashtags, as demonstrated here, (especially if they are clever or funny) is OK. However, if you are abusing hashtags or talking in hashtags in your posts, you are annoying your kids. And everyone else for that matter. Stop. Why? Because #youretoooldtousehashtags.

Commenting on every single status update

You must exercise a great deal of discipline when trying to decide if you should comment on your kids’ stuff. The answer to, “Should I comment on this post written by my kid?” nine times out of 10 is “no.” It’s hard, but try to refrain. If you must, make sure it is light-hearted. Never criticize your kid or their post on Facebook and do your best to keep your opinions to yourself. (You live with your kids — you can tell them what you think of their post in person.)

If your kid “friends” you on Facebook, they’ve allowed you into a private place in their life. It’s like being granted full-access to their locker at school and then constantly commenting on what you find there. On the rare occasion you comment on your kids’ stuff, whatever you do, don’t be the first to comment. Facebook is sort of like a popularity contest. Often teenagers put stuff on Facebook to see what sort of attention it gets. How embarrassing to have the first (and heaven forbid) only comment be from their parent.

Along those same lines, do not, under any circumstances, be the first person to “Like” your kid’s status. This is humiliating for your child and opens them to Facebook mocking from their friends. Can’t you just hear the jeers? “Oh, your mommy liked your post. It must be good.” If you want to give your kid’s post a thumbs up, wait until others have done so first, and here again, do it sparingly.

Kids aren’t the only people who use Facebook for attention. Parents sometimes use Facebook to show the world what wonderful, caring people they are. If you are putting things on your kids’ wall like, “You are the most amazing son in the world and I love you with every breath I take,” just don’t. If it is their birthday or they are gone for the summer, once in a while something like this is OK. Also, those memes that say “Share if you love your daughter” are overdone. We already know you love your daughter and she knows too, because you are texting her messages of adoration instead of posting them on Facebook. It doesn’t make your kid look cool for you to show the world how loved they are. You have to love your kid and the world knows it. Worse yet, this habit alienates your kids’ friends who are growing up with parental neglect.

If you heed no other point in this article, for the love of parenting healthy children, be mindful of your own posts. Your kid sees them, as do (in most circumstances) some of your kids’ friends. Whatever you do, don’t post stuff about your single/sex life, photos of you in revealing poses (or bathroom selfies — a huge parental no-no) or posts about how pie-eyed you got last weekend. Remember that your job as a parent on Facebook is to not humiliate your kids.

This is easier said than done, but kids want to say and post inappropriate things from time-to-time because it’s funny or to get attention. It’s hard when your kids drop the f-bomb on Facebook and you desperately want to say something, because now they are humiliating you by making it look like they were raised by wolves.

One of the things kids enjoy about Facebook is the freedom of expression it affords them. When your kid says something, um, colorful, on Facebook do your best to let it go. (Obviously if your kid is saying harmful things to others, or bullying others, then it’s time to rope them in by grounding them from their computer and/or Facebook for a bit.) It’s perfectly OK when you are catching up on your day with your kid to slip in a “What was up with that post today?” or “Was your inappropriate post entirely necessary? You’re making me look like a crappy parent.” Keep it light, but if it really bothers you, say something in person. Don’t comment on your kid’s offensive post unless you want a one-way ticket to the “un-friended” zone.

Help! I sent my son to junior high and he turned into a jerk!
Keeping your kids out of family drama
I just caught my kid touching himself — now what?